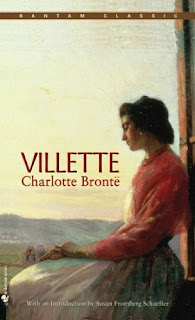 Sorry, but I'm getting kind of bored with Villette.

Not much happened the last few chapters.  Though she won't admit it, I'm pretty sure Lucy is falling in love with Graham/Dr. John.  They're spending a lot of time together, but I have a feeling he thinks they're "just friends."  During an outing to the theater, there's a panic, and in the throngs of people trying to leave, a young woman swoons.  Naturally, Dr. John comes to her rescue.  This girl is oddly familiar!!

This does not bode well for Lucy -- especially when all of a sudden she doesn't hear from him or his mother for weeks.  Seven weeks, to be exact!  Finally, she gets a note from her godmother, inviting her to come over and meet some old friends -- Ginevra's wealthy uncle and cousin.  Lo and behold, the cousin is the swooning girl who is none other than . . . little Polly, all grown up now!  I had been wondering all along when she would show up, or whether Ginevra and Polly were the same person.

Polly's father, who is now know as Count Bassompierre, is looking for a school for Polly.  She's seventeen but apparently her education has been sketchy.  He's very interested in Madame Beck's school.  Polly seems a lot like Ginevra, equally annoying, but with more money.  She is shocked -- shocked, I tell you!  -- that Lucy actually has to earn a living.

And of course, Dr. John rekindles his friendship with Polly.  I forsee him falling in love with her now that he's over Ginevra, and will break Lucy's heart.  I'm also envisioning some catfights between Polly and Ginevra now that Dr. John has gotten tired of her.  Will this be a love triangle? Quadrangle?  Hopefully things will pick up now because the last few chapters have been awfully slow.

The audio of Jane Eyre, on the other hand, is just getting better and better. And it's overdue at the library, eek!
Posted by Karen K. at 9:37 AM