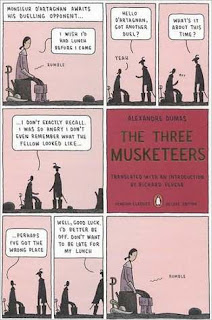 Well, I have finally finished The Three Musketeers.  This is particularly satisfying because it's one of the longest unread books on my TBR shelf, and one that I've owned for about four years, so that's a good thing.  I did enjoy it, but I have to be honest, it's not the greatest work of literature in the world.  It's a fun book, and I'm glad I read it, but it's not particularly deep or literary.

The second half of the book dragged in parts -- first, there was the battle of La Rochelle, which has something to do with Catholics vs. Protestants.  Frankly, action scenes tend to bore me.  I guess I have a hard time imagining them in my head.  Also, there was a section of five or six consecutive chapters about Milady that just went on and on.  I kept trying to slog through them but I'd read a chapter and put the book down, but it was hard to get started again.  I only had a hundred pages to go and I just wanted things to get wrapped up.

The parts of this book that I loved best basically included one or more of the Musketeers, and D'Artaganan -- for me, it started to get boring if it focused on the other characters.  I don't know if these sections weren't as well written, or the story just dragged, but things definitely perked up if one of them was in the scene.  Of course the best scenes of all are the ones when they're all together, usually with some witty banter.  I did get bored with Milady's scheming and Cardinal Richelieu's plotting, though the ending was pretty satisfying.

So -- a good book, overall, though I can't say that I'd ever want to read it again.  I do want to get to The Count of Monte Cristo someday, though is length is a little intimidating.  I'll have to wait until I get through some of the other Big Fat Books on my TBR shelf before I attempt it.

And for those of you who have not seen the trailer for the upcoming film adaptation of The Three Musketeers:

Looks fairly ridiculous -- I don't remember any flamethrowers in the book, nor any scenes with Milady dodging bullets Matrix-style!  Script by Andrew Davies (who brilliantly adapted so many classics for the screen including Pride and Prejudice and Bleak House, two of my favorites) yet directed by Paul Anderson best known for Resident Evil.  Riiight.
Thanks again to Allie of A Literary Odyssey for organizing this readalong. I look forward to reading all the other postings.
Posted by Karen K. at 8:01 AM