The Village by Marghanita Laski 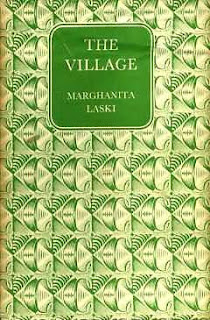 So, now I'm up to my 28th Persephone book, and this one is a real winner.  This publisher's catalog keeps getting better and better.  Almost every time I read one of their titles, I think to myself how glad I am I've discovered them.  (And how happy I am that I have more than 60 left to read!).

Like many Persephone titles, this is domestic fiction, and deals with the rapidly changing society in British.  Originally published in 1952, The Village begins in 1945, on the very last night of the war.  Two middle-aged ladies, Mrs. Trevor and Mrs. Wilson, are spending their last night together on overnight duty at the Red Cross station in their village, a suburb not far from London. The war has made them co-workers and equals, but before the war, Mrs. Wilson, a working-class woman, had worked as a domestic for Mrs. Trevor, one of the gentry.  The next day, things will return as they were, with Mrs. Trevor will be the social superior of Mrs. Wilson.

Or will she?  Times are changing in postwar Britain, and quickly.  Mrs. Trevor is barely getting by in genteel poverty, as her husband, a wounded veteran of WWI, can barely make a go of his business.  Her oldest daughter Margaret, aged 17, is described as sweet but a bit dull and not particularly pretty, and she doesn't have much future in sight.  The younger daughter Sheila is terribly bright, and it's the family's hope that she'll someday become a school headmistress or mathematics teacher or something equally suitable.  The family is barely scraping by on a few pounds a week, and Mrs. Trevor is miserable.


Mrs. Wilson's family, on the other hand, is doing very well.  Like many working-class families, everyone in the family is hard at work and making money -- much to the chagrin of the gentry.  Her son Roy has recently returned from the war and is doing very well as a printer.  It seems terribly unfair to the upper-class people that these laborers are doing better than they are, and that more and more often, class and breeding seem to be less important than hard work, and they can't get over their snobbery.  Relationships in the village become very complicated due to friendships, jobs, and love affairs that begin to cross class boundaries.   Some people seem very willing to accept change and some are fighting it tooth and nail.

This book seems at first to be classic domestic fiction, but it's really about class differences in Britain and how everything changed in the last century.  Having grown up in an extremely middle-class neighborhood in suburban Detroit, I was much more aware of ethnic and religious differences than class.  Nobody I knew was old money -- all those people lived in different neighborhoods miles away.  Now, I'm living in a Texas neighborhood where million-dollar houses are just a few streets away from tiny bungalows, and my daughters' school mates could be the children of professors or oil executives or domestics.

One of the characters in the book is an American woman married to an English upperclass man, and she can't understand why the class differences in England are so important and why it's so impossible for people to overcome them like Americans do.  It's pretty obvious she feels superior about it until her husband points out the racism in America and how unlikely it would be for someone in her family to befriend a Negro (so weird to write that, but I am quoting the book which was written in 1952).  He points out that Americans are just as class conscious, but it's just repositioned as racism.  It made me think about my family and friends and the way I was raised in a very segregated suburb.

This is the third book I've read by Marghanita Laski, who is one of Persephone's most beloved authors.  Another thing that struck me was how very different all three of the books have been -- the first, The Victorian Chaise-Longue, was a bit like a ghost story; the second, Little Boy Lost, was an intensely emotional book about a man's search for his missing son in postwar France.  I liked them all but I think was my favorite of her books so far because it resonated the most.
Posted by Karen K. at 10:19 AM