Because of the Lockwoods by Dorothy Whipple 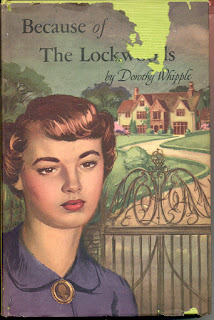 I have now read three books by Dorothy Whipple, who has quickly become one of my new favorite authors.   I've read two of her books published by Persephone, and based on these great reviews by Book Snob and The Literary Stew, I sought out Because of the Lockwoods.  Currently it's out of print but I was able to get it very easily via ILL (and I've heard a rumor that it's going to be reprinted by Persephone in 2012!).

Anyhow, this book is basically about two families, the Hunters and the Lockwoods, who live in a fictional industrial town in Northern England.  The Lockwoods are doing very well and are regarded as local gentry, though they are not titled, and the Hunters have fallen on hard times.  Mr. Hunter was an architect who lost money during WWI (since no one was building), and then he had the bad luck to die, leaving very little for his wife and three children.  Mrs. Lockwood pressed her husband into serving as a sort of financial advisor to Mrs. Hunter, who is pretty spineless and helpless.  Mr. Lockwood has not done a very good job of helping with the finances.  Not only that, Mrs. Lockwood and her eldest children seem to take great pleasure in constantly showing off their good fortune to the Hunters.   They were so obnoxious that I wanted to jump into the book and give these people a good smack.

The youngest Hunter child, Thea, has both brains and spunk, and she decides she's tired of genteel poverty and she's going to make something of her life.  The three Lockwood sisters are going to France for a year of school, and she decides that she wants to go too.  Of course, being poor, she'll work as a teacher, but so what?  She's dying to go to France and see the world, so off she goes.

Of course, things do not go as planned.  I won't go into detail and spoil the plot, but young Thea's desire to better herself sets off a chain of events that affects both families, in good ways and bad.  Like The Village by Marghanita Laski, this book is ostensibly domestic fiction, but it has a lot of undercurrents about the British class system and attitudes about wealth and upbringing.   Some of the characters are just infuriating with their snobbery and entitled attitudes, and I really wanted to throttle them.

Once again, Whipple's characters are brilliantly drawn.  I loved Thea and hated the Lockwoods, and I was rooting for one particular character who was working really hard to make a better life for himself and his family.  Again, like The Village, some of the characters were so passively accepting of their situation, and some had the gumption to make something of themselves.  I guess it is just my innate American-ness that can relate to this -- it's that pioneer spirit, in which anyone can come here and make something of himself if he works hard enough.

[By the way, the cover in the image is sort of deceiving -- by the hairstyle, it looks vaguely 1950s to me but in fact it's set between the wars.  That edition happens to be published in 1949, so there you are.]

Now that I have a new favorite author, I have a dilemma -- do I read all of her books at once, or spread them out and make them last longer?  It's a conundrum, especially since she's dead and won't be publishing any more books.  Bloggers, what do you do?  Do you become obsessed with an author and read all the works right after the other, or do you ration them out?  Should I read the rest of the Whipples or save them for later?
Posted by Karen K. at 3:41 PM