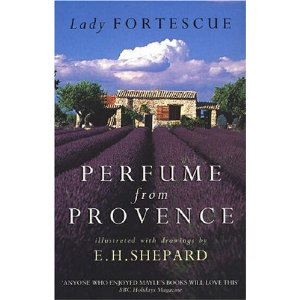 I am both proud and and embarrassed to have finally finished this book, which is actually quite ridiculous, since it is a both charming and delightful book, a lovely memoir written in the 1930s by an Englishwoman who moved to Provence.  It's not a long book, nor a difficult one.   I am proud because it is one of the books that has sat unread on my TBR shelves for the longest, and I am embarrassed because I purchased this book more than twelve years ago!  To the best of my recollection, I purchased it in 1998 during my first visit to Epcot in Disneyworld, at the French pavilion.  (Yes, they sell books at Disneyworld that are unrelated to cartoon characters -- I have bought quite a few.  Most of them are still unread also, le sigh.)

Before I digress any further with my rant about owned-and-unread books, I should probably actually write something about this book.  There isn't that much to say, really, except that it is a lovely memoir by Lady Winifred Fortescue.  Having lost lots of money in the late 1920s (who didn't?) she and her husband (known only as Monsieur in the book) have moved to Provence where they purchased a small cottage and renovated it.  It isn't really mentioned in the book, but her husband is Sir John Fortescue, who was the King's Librarian and Archivist (King George V), and historian for the British Army.

The book is short, only about 250 pages with illustrations, and contains nine themed chapters about different aspects of life in the country, i.e., building, gardening, harvesting, driving, etc., in which she tells little stories about how charming it is.  Sometimes she's a little condescending about peasants and working-class people, but she was an upper-class British lady in the 1930s, so I guess it's to be expected.

However, Lady Winifred really does seem to love all the people in Provence, and admire them.  It seems like most of the French people were extremely friendly and hardworking, and there are many incidents in the book where complete strangers would go out of their way to help her -- in one extreme case, three truck drivers stopped to help her get her car back on a winding mountain road in the middle of a downpour -- basically, these men built a wall of boulders under her car to prop it up so it wouldn't fall down the side of a mountain!!  And they didn't want to take money for it!  (Of course she does insist on paying them and later contacts their employer and says how wonderful they were, etc.)

It does sound like a very different way of life, just in the way people do business, the pace of life, and so on, but it sounds wonderful.  According to the introduction by Patricia Wells (written in 1993), things still hadn't changed much by the end of the century.  It makes me want to visit Provence more than ever. Apparently Lady Winifred lived in Provence until WWII, and returned after the end of the war.  She published several more books which appear to be out of print, though it seems there are plenty of used copies available.

It's just so silly that I took so long to read this book, and that I have probably packed it up and moved it FIVE times.  Does this happen to everyone?  Bloggers, what is the longest you have kept a book unread on your shelves?  And was it worth it?  I have other books I've kept for years that were disappointing when I finally read them -- at least I enjoyed this when I finally got around to it.  In this case, I'm a little angry that I waited so long to read it because I did like it.  I've had other books that just made me annoyed that I'd been schlepping them around for so long, allowing them to take up valuable space when they weren't even that good!

And I seriously think I've bought more books in the past few weeks than I would have bought if I hadn't signed up for the TBR Dare, during which I tried not to buy books for three whole months.  Maybe I should take a hint from Simon at Stuck in a Book, who challenged himself last year to buy no more than 24 books the entire year.  Does that count for birthdays and Christmas and Paperback Swap??  That's dangerous too, since I either get rid of books I know I'll never read (or books I've finished and didn't love enough to keep) and replace them with even more books I want to read!  It's a vicious cycle, isn't it?
Posted by Karen K. at 12:34 PM

Labels: between the wars, France, memoir, owned but unread