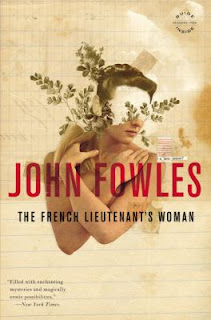 This was one of the books I chose last year for my TBR Challenge, and since it's a neo-Victorian, I thought it would fit in very well with the Victorian Celebration.  Well, yes and no.  It's set in the Victorian era, though it was written 100 years later, in 1969, and even though Fowles does a very good job of writing in the Victorian style, it's definitely a modern novel, or post-modern one.  In other words, it's very meta and the ending just confused the heck out of me.

I suppose I'm getting ahead of myself.  Ostensibly, this is the story of a love triangle between Charles Smithson, an idle gentlemen in his early thirties, the heir apparent to a title and grand estates; his fiancee Ernestina, the sweet but spoiled only daughter of a rich tradesman; and the eponymous French Lieutenant's Woman, Sarah Woodruff (the French Lieutenant himself is only mentioned in passing, so don't worry about him).   Ernestina is staying with her aunt in Lyme a few months before her marriage to Charles, and he's come down to Lyme to visit her and poke around looking for fossils (the same ones discussed at length in Remarkable Creatures by Tracy Chevalier, which I read several months ago).

One day while Charles and Ernestina are out walking out on the famous Cobb, Charles sees a beautiful and mysterious woman, staring at the sea.  She's a local eccentric known as the French Lieutenant's Woman -- apparently the Lieutenant was a shipwreck survivor and she fell in love with him while nursing him back to health.  She had planned to run off with him, but instead he left without her and ruined her reputation.  Sarah is employed as a companion by a nasty and pious rich woman who likes to torture the less fortunate, and she's forbidden to go out walking to the sea or the woods, but she defies her mistress and keeps running into Charles.  Charles then becomes obsessed with her, which complicates his engagement, as you can well imagine.

This story starts out as a fairly straightforward Victorian melodrama, but after a few chapters, it becomes apparent that it's more than that.  The omniscient narrator becomes more and more involved in the story, addressing the reader directly and reminding us that this is a modern book, with references to the present day and how Victorians were so different, unable to imagine television and computers and whatnot.  He starts putting in witty asides and footnotes and whole histories of other people, to try and show us how the Victorian mind worked and how different things are in the present (that is, the late 1960s).

I liked this book but at some points I did get very annoyed by the narrator, who seemed rather smug and condescending to the reader.  I assume Charles' attraction to Sarah was supposed to symbolize the break with traditional repressive Victorian society and desire for freedom.  (He's also a lazy snob, and I don't think he's ever worked a day in his life.)

One thing that really bothered me was I found the novel extremely sexist -- nearly all the female characters were either manipulative, gold-diggers or looking for husbands, with the exception of Ernestina's aunt who seemed genuinely kind.  There's a lot of discussion about hysterical females which I found really off-putting -- I'm sure Fowles is trying to show how modern he is, but since it was written  during the late 1960s, during the women's movement, I can't help but wonder if he's taking shots at feminism.

Also, I found the ending rather confusing.  I guess post-modern meta-fiction is just not my thing.  Still, overall I liked this book, though I wasn't what I expected at all.  I'd seen the movie years ago but I barely remembered anything about it, which I suppose is a good thing.
Posted by Karen K. at 3:16 PM