The Odd Women by George Gissing 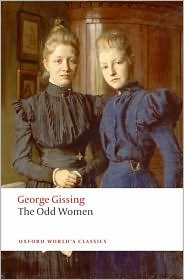 Before the Victorian Celebration, I wanted to read at least one book by an author that was new to me.   I had two novels by George Gissing on the TBR shelf, and they weren't too long, so I thought one of them would be a good choice.  I chose The Odd Women because it was the shorter of the two, and because I'd seen some interesting reviews on the blogosphere in the last few months.

From the title, I thought it was about strange or unconventional women, but then I thought it was going to be about Victorian spinsters -- i.e., odd as in unattached, unpaired.   The beginning of the book seems this way, with six sisters who are suddenly placed in genteel poverty.  The book then focuses on three of them, Alice, Virginia, and Monica.  Alice and Virginia, the eldest, are eking out an existence working as a paid companion and a teacher; the youngest, Monica, starts working as a drapers shop at 15.  Then the action jumps forward several years when Alice and Virginia get a letter from an old friend, Rhoda Nunn, who is living in London.  She's employed at a business school for young women that teaches them typing and office skills.  She urges the women to invest in a typewriter and try to make a better living for themselves, and to get Monica away from the exhausting hours she's working as a shopgirl.

In the beginning, it seemed that this book was going to be about Alice and Virginia and their desperate lives as Victorian spinsters with few job prospects, but then the focus of the book changed.  The story is really mostly about two different women:  Rhoda Nunn, who's intelligent and unconventional; and the youngest sister Monica, who is tempted by a very traditional (though loveless) Victorian marriage for her security.  Things don't work out exactly as planned for either woman.

What really surprised me about this book was how unabashedly feminist it was, especially for a book written by a Victorian man in 1893.  Gissing creates some very forceful arguments about the plight of women and marriage during that time.  Some of his characters must have been extremely revolutionary for this time, and I'm sure it was pretty shocking.

I really liked this book.  The characters end up being quite interesting and I got really invested in how this was going to turn out -- not how I expected at all!  Other than the complete shift in focus, the only minor criticism I have about it was that a few sections got kind of preachy and started to drag.  A couple of the characters really lecturing each other about feminism and women's roles and while I understood the point, it did come off as rather didactic and really slowed the book down for me.

The writing style was also extremely readable -- a lot of the Victorians tend to be slow reading, but this one was actually pretty speedy compared to Dickens and Eliot.  George Gissing doesn't get much attention among Victorian writers but I'm very glad I discovered this book.  I also have another of his books, New Grub Street so I'm looking forward to reading that one too.
Posted by Karen K. at 7:27 PM