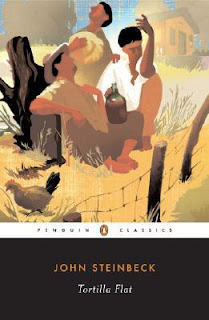 Since I run my library's book discussion group and I have all the power, I chose Tortilla Flat for our July read, because it's on my Classics Club list.  ( If nobody else suggests any titles, then I feel completely justified in being mercenary and picking books I want to read.) It's one of Steinbeck's early works, and it's fairly short, and we hadn't read any classics yet this year, so I thought it would be an interesting choice.  Plus, there were plenty of copies in the library catalog, so I thought it was perfect.

Well, maybe not.  We had a good turnout for the group, but I'm not sure the discussion went very well -- I think this was the most heated debate that I've ever seen in a book group!  Basically, one person hated them book and thought it was a complete waste of time.  The conversation ended up digressing into a debate about what people should or shouldn't read for pleasure.

But I'm digressing.  Here's the setup:  After World War I, a young slacker named Danny comes home to find that his grandfather has died and left him some property with two ramshackle houses in Tortilla Flat, an area in the hills around Monterey.  (Danny's no war hero; he spent the war breaking mules in Oklahoma.)  Danny moves into one house and lets his ne'er-do-well friends move into the other.  Told as series of vignettes, this is the story of Danny and his friends Pilon, Pablo, Jesus Maria, and Pirate, and how they spend their days basically drunk on red wine.  According to the introduction, it's loosely based on Arthurian legend; these guys are supposed to represent the Knights of the Round Table, but I didn't see much chivalrous behavior.  They drink and argue and spend most of their days trying to figure out how to get food and more wine without having to do any more work than is necessary.

Parts of it were pretty funny, but I didn't get particularly attached to any of the characters until about midway through the book.  In fact, it was pretty much the same story over and over until that point in the book.  I was wondering how I was going to get through it and it's only about 200 or so pages long, one of Steinbeck's shorter works.

Eventually there was one episode that actually got me invested in one of the characters, so I began to enjoy it more and even laughed out loud a few times.  Frankly, for me, a bunch of guys sitting around drinking just isn't that entertaining, and I didn't much see the point of the book.  A few years ago I read Cannery Row, not long after I discovered Steinbeck, and it seemed to have a similar premise, about the lives of ordinary people in California, but I found that one much more interesting and entertaining -- from what I remember, at least the characters did something -- there's one episode about some guys frog hunting for a scientist which is absolutely hilarious.  (Apparently it's some kind of war metaphor, but even if you don't get that part it's still funny).

I'm no literary expert, but I get the definite impression that Steinbeck is kind of uneven -- some of his stuff is great, like The Grapes of Wrath, and some if it is just meh.  I really like his travel writing, like Travels with Charley and A Russian Journal, but I'm really unimpressed with the shorter stuff so far.  I thought Of Mice and Men and The Pearl were both unbelievably depressing, and I couldn't even get through The Red Pony.  I'm probably the only person in America who got through high school without reading any of those.

Tortilla Flat was okay.  I suppose if I knew anything about Arthurian legend I would have gotten more out of it.  I'm just glad it wasn't any longer.  My oldest daughter was assigned East of Eden for her summer reading, so I'm reading it along with her, and already I can tell it's much better.

Anyone else a Steinbeck fan?  Who's read Tortilla Flat?  Is it really a mediocre Steinbeck or am I just missing the point of the book entirely?
Posted by Karen K. at 9:19 PM