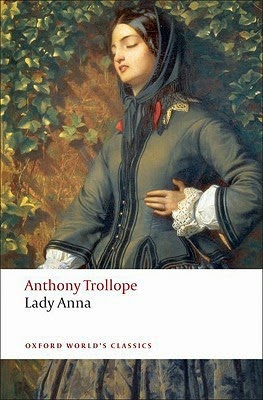 "Obstinate, headstrong girl! I am ashamed of you!"

Okay, that's actually a quote from Pride and Prejudice (Lady Catherine DeBourgh, to be exact) -- but it's so perfect for this book, I couldn't resist.  Lady Anna is one of Anthony Trollope's stand-alone novels, and it's basically about a girl who is defying her family to marry the man she loves.

So, the setup:  the wealthy Earl Lovel, a widower in his late forties, marries a beautiful girl named Josephine Murray, who is from a good family, and they live somewhat unhappily (well, she's unhappy) at his dreary estate in Cumberland. About a year into the marriage, when she's expecting her first child, Lovel drops a bombshell on his young wife: the marriage isn't legal -- he still has a living wife in Italy! This technically makes Josephine his mistress and the child will be illegitimate.  Lovel then sails off into the sunset on his yacht back to Italy, presumably to ensnare another mistress, rubbing his hands together and twirling his mustaches diabolically all the while. Shocking!!

Fast-forward almost 20 years.  The Earl comes back to this estate with another wife in tow, also Italian.  He claims the original Italian wife is dead, and he refuses to acknowledge the daughter he'd left behind in England, who with her mother has been abandoned by all their friends and relatives (who now claim that they knew all along the marriage was a sham.) Mrs. Murray and her daughter, Anna, have had only one friend and supporter all these years -- a tailor named Mr. Thwaite, who has sacrificed much of his own income to help Mrs. Murray in lawsuits against the Earl.

Then, another wrinkle -- Earl Lovel dies intestate.  So, who gets the estate?  The title automatically goes to a distant cousin, young Frederick Lovel, a second son and military officer who never expected to inherit a dime (much like Matthew Crawley of Downton Abbey).  The money, however, is another story -- does the money go to the new Earl, the direct descendant?  Or is the closest relative his daughter Anna? And what about those Italian women?  It's a mess.

Meanwhile, some clever lawyers have an idea -- the two English cousins should join forces, discredit the Italians -- and -- wait for it -- get married! Yes, this would solve everyone's problems. Anna and Frederick are both of marriageable age, and this way, they both share in the fortune.

But naturally, there are more problems. Anna is actually in love with Daniel Thwaite, son of the aforementioned tailor, who was her childhood friend and playmate -- in fact, the only friend who stuck with her for her entire life.  But is she really in love with him, or just feeling a sense of gratitude?  And shouldn't she be aiming her sights somewhat higher, since she's an aristocrat?  Shouldn't she stick with her own kind?

If the answers were easy, it wouldn't be a Trollope novel.  There's lots of legalese, discussion about social classes, and a lot of arguments between mother and daughter.  It's a domestic novel with a lot to say about class conflict.

I really enjoyed this novel.  It's a fairly fast read for a Trollope work.  Trollope actually wrote the entire novel while on a journey to Australia, and considered it one his best novels.  I think it's good but it doesn't have quite the complex structure of some of the longer novels, like The Way We Live Now and He Knew He Was Right.  I did find it a bit one-note in places -- some of the characters seemed to keep making the same arguments over and over, and some of them seemed a bit one-dimensional.  But it's definitely great reading, and a good introduction to Trollope if you're afraid of some of the giant Victorian doorstoppers.

I'm counting this as my Classic With a Name in the Title for the Back to the Classics Challenge.
Posted by Karen K. at 9:27 AM