The 1951 Club: School For Love by Olivia Manning 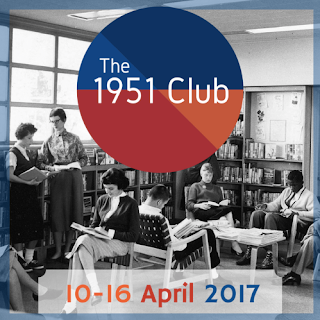 I purchased School For Love a couple of years ago after reading and loving Olivia Manning's Balkan trilogy. I also purchased the omnibus of her Levant Trilogy, but I hadn't gotten around to cracking either of them until I realized that School For Love was published in 1951 and I could use it for the 1951 Club hosted by Simon and Kaggsy! 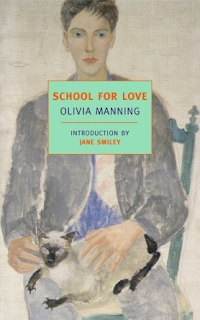 Set in 1945, just after the war, it's a coming-of-age story about young Felix Lattimer. The story begins as Felix, aged about 14 or 15, is traveling alone from Baghdad to Jerusalem. Recently orphaned, he's been staying with family friends until a sort of relative named Miss Bohun has offered to take him. Miss Bohun is a spinster, probably in her late fifties or early sixties, and was the adopted older sister of Felix's late father, who was killed in Baghdad during the war. Felix's mother, who was loving but rather flighty has recently died of typhoid because she hadn't bothered to get her annual vaccination. Felix does have an uncle living in England, but due to heavy demand for soldiers demobilizing, he's low priority to get transport back to England and is therefore sent to live with Miss Bohun, who rents out rooms to refugees.

Felix has a bit of odd life with Miss Bohun. She's rather eccentric and heavily involved with some sort of evangelical church group called the Ever-Readies. She seems to charge Felix rather an awful lot of money for his expenses, yet she doesn't want him to turn on the heat in his room and they seem to exist on mashed beans. The other residents are a Polish widow and her son, who claims to be a count, and an aging artist living in the attic. Felix's favorite companion is a beautiful Siamese cat named Faro, his only source of love and affection.

Felix's days seem rather dreary until a new boarder, a young, beautiful widow named Mrs. Ellis moves in. She's rather glamorous and Miss Bohun had expected her to be a new companion until it becomes quite obvious that their personalities will never mesh and the whole dynamic is shaken. Felix becomes more and more attached to Mrs. Ellis and finally things come to a head between all the characters.

It's a short book, just under 200 pages, but Manning really creates vivid and realistic characters and I found myself really invested in them -- I wanted to throttle Miss Bohun and cook Felix a good meal, among other things. And the ending left me gobsmacked. I finished it and just sat there thinking about it. It was just brilliant.

I'm also counting this as my 20th Century Classic for the Back to the Classics Challenge.
Posted by Karen K. at 4:35 AM