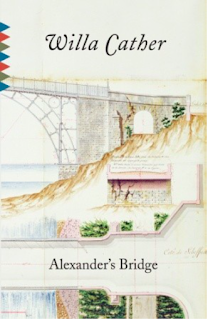 Last year I waited until the bitter end to complete my own reading challenge, and I am determined that I'll read way ahead this year for the Back to the Classics Challenge. I have thrown myself headfirst into my TBR piles this year and have already completed three books for the two challenges for which I've signed up (BTCC and the TBR Pile Challenge).

Published in 1912, Alexander's Bridge by Willa Cather is her first novel, and the last of hers for me to complete (except for the short stories). It is the story of Bartley Alexander, a successful American engineer, famous for creating unbuildable bridges. The story begins in Boston, where an old schoolmate Lucius Wilson has come to visit. Wilson meets Alexander's beautiful and gracious wife Winifred, and learns all about Alexander's success and how they met while he was building a famous bridge in Canada, his first big break.

Soon after, Alexander travels to London for work, where he is reunited with an old flame, an Irish actress named Hilda Burgoyne. They had been madly in love years ago, but Alexander broke things off when he met and married Winifred. Hilda has now become very successful and she and Alexander keep meeting. One thing leads to another and soon they're having an affair which lasts off and on for several years, as Alexander travels back and forth between London and America, working on various jobs. The bridges that he builds are a metaphor for his struggles to connect his two lives. He loves both women and can't bear the thought of living without either of them.

The book started out a little slowly but picked up when Alexander went to London and met up with Hilda. I think I appreciated it more because I've been to London a few times since moving overseas, and have been able to go to some of the theaters in the West End, so I could really picture that part of the story. The plot is very simple, but I didn't find the characters as compelling as in some of her later novels like Lucy Gayheart which I read last year. (Of course it's Cather's first novel and so it's not surprising.) I did find some of the writing beautiful and insightful.

This was a very quick read -- I literally read this entire book in one sitting on an airplane (and it was a fairly short flight). It's not my favorite by Willa Cather but if you're a fan of her work, it's worth reading.

I'm counting this as my Classic Novella for the Back to the Classics Challenge.
Posted by Karen K. at 6:31 AM