Buddenbrooks by Thomas Mann: A Family of German Trainwrecks 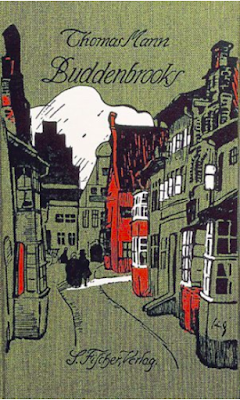 Having spent nearly three years in Germany, I thought it was time I really buckled down and tried to read some actual German literary classics. Published in 1901, Buddenbrooks is one of Thomas Mann's masterpieces and is inspired by the history of his own family.

The story begins in 1835, in a northern German city modeled after Mann's hometown of Lubeck. The Buddenbrook family is hosting a dinner party shortly after moving into their latest home, a large historic home sold by another merchant family whose fortunes have declined. We are introduced to the Buddenbrooks: Johann, a successful grain wholesaler (also known by his title, Consul), the older son of his father's second marriage. He and his wife Elisabeth have three children, Thomas, Christian, and Antonie, known as Tony. A second daughter will soon join the family, and there is a young ward, Klothilde, the child of a poor relation. Buddenbrooks traces the family over about 40 years, focusing on the three older children, tracing their successes and more often their failures throughout the 19th century. 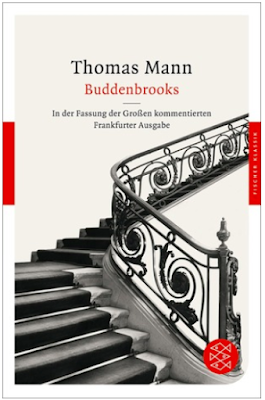 It's quite a long book, divided into eleven parts (more than 700 pages in my edition). The first hundred pages or so were a bit slow, mostly just setting up the characters -- the entire first part is just the dinner party (told in great detail, including descriptions of the food). The three principals are fairly young and their story is mostly just about their education and misadventures. Things started to pick up for me in Part III when young Tony attracts an unwanted suitor called Herr Grunlich, a commercial agent from Hamburg. Tony only eighteen, but the family seems unfazed when this 32-year-old man starts hanging around their house. He doesn't seem discouraged even when Tony is openly rude to him, and to her dismay, offers her a proposal of marriage. Naturally, the family assumes Tony is too young to "know her own mind" and pressure her to accept, which made me want to throw something across the room.

What eventually follows is the first in a series of Bad Decisions by this family. It seems like they're doing the right thing at the time, but basically, all three of the elder children are on a slow, downward spiral, repeating mistakes over and over, both financially and in their personal lives. Essentially, they are a bunch of slow-moving trainwrecks. The plot of the storyline shifts back and forth, mainly concerned with Tony and her oldest brother Thomas, who has been groomed to take over the family business. (Younger brother Christian is a charming ne'er-do-well who makes occasional appearances to drag the family down even farther.) 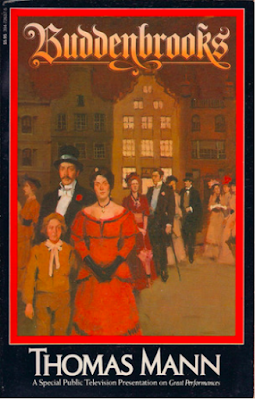 I wouldn't have thought the story of a German merchant family would be so fascinating, but it absolutely was. After those first 100 pages I was completely hooked and could not stop reading it, and finished most of it in about three days. It's very much a long Victorian saga, as it's set up in multiple sections with mostly very short chapters. It absolutely felt as though it could have been serialized, though I believe it was published in a single volume. It also reminded me a bit of The Forsyte Saga by John Galsworthy.

I particularly enjoyed Mann's descriptions, especially of domestic life. Mann goes into surprising detail about the homes, decor, and fashions of the time, and there are a lot of descriptions of meals in this book. Here's a quote regarding a Sunday dinner attended by the suitor Herr Grunlich:

He ate mussel ragout, julienne soup, baked sole, roast veal with mashed potatoes and Brussels sprouts, maraschino pudding, and pumpernickel with Roquefort cheese -- and at each course he offered a new tribute appropriate to the delicacy. For example, raising his dessert spoon, he gazed at a statue woven into the wallpaper and said aloud to himself, "God forgive me, I can do no other; I've eaten a large serving, but this pudding is just too splendid. I simply must implore my hostess for a second helping.

I suppose this is Mann's way of showing how bourgeois the family is, but I love food writing so that's one reason why I was hooked -- it's making me hungry just thinking about it. I did get really invested in the characters and would stop reading and yell at them when they made bad decisions. It will definitely be one of my top reads this year and now I can't wait to read Mann's other long saga, The Magic Mountain. Also, if you're looking for a copy, I highly recommend the 1993 edition translated by John E. Woods. I actually own a Vintage International copy that was translated back in 1924, but I didn't like it as much as the e-book version so ended up not reading my print copy at all. 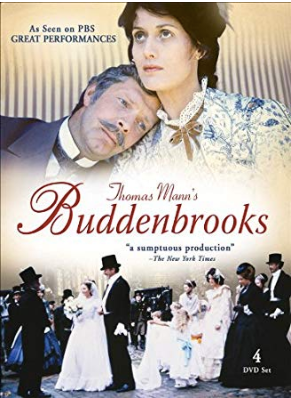 I've also discovered that Buddenbrooks was adapted into a TV miniseries in 1979. Used copies are available on Amazon but they're really expensive, so hopefully I can get it from a library. It's available from Amazon.de for a mere 20 euros but I'm pretty sure that version doesn't have English subtitles.

I'm counting this as my Very Long Classic for the Back to the Classics Challenge.
Posted by Karen K. at 7:08 AM