Classics Spin #23: The Hireling by L. P. Hartley; and Some English Cathedrals 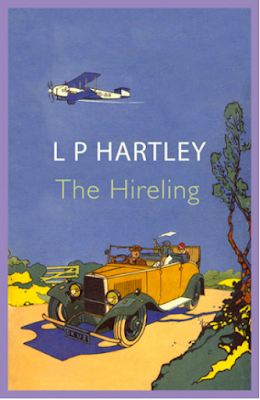 It's June 1st so that means it's time for my post on Classics Spin #23, which for me was The Hireling by L. P. Hartley. Published in 1957, it's the story of Stephen Leadbitter, a thirty-something man who earns a living as personal driver, taking customers in the car he is slowly paying off through a hire-purchase. Other than his job, he has a very solitary existence, no real friends or family. The aptly named Leadbitter had formerly been in the army and still lives his life very much as a disciplined military-type man. One day he takes on a job driving a wealthy widow on a day trip to Canterbury. Much to his surprise, she's young and beautiful. Lady Franklin, still mourning the death of her older husband, wants to visit all the cathedrals that her late husband loved, thinking it will bring her some kind of closure.

Unlike most passengers who sit in the back and want silence or the radio, Lady Franklin wants to sit up front with Leadbitter and wants to her all about him. Since has little life outside of his job and he wants to please his customer, Leadbitter starts making up stories about an imaginary family, complete with a wife and three children. The trip goes well and Lady Franklin starts booking Leadbitter for more day trips around the countryside. Eventually, Leadbitter begins to look forward to the bookings, and begins to develop feelings for Lady Franklin, which leads to a very awkward moment and then spirals into something tragic and heartbreaking. 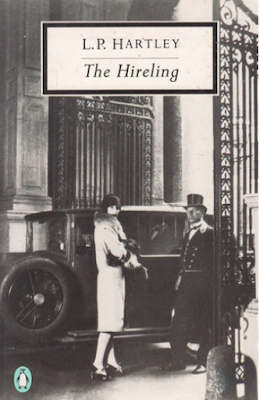 This was a fast read, and it wasn't at all what I was expecting. I don't know what I thought it would be -- a sweet love story? Driving Miss Daisy, but with white people? It was neither, though it definitely had a lot to say about class consciousness -- I honestly did not see them having a happily ever after (and now I'm having serious doubts about the romance between Tom the chauffeur and Lady Sibyl in Downton Abbey). I had only read one other book by L. P. Hartley which was The Go-Between, which I really liked, and which also has a lot to say about love between the classes. I've also heard wonderful things about The Boat and the Eustace and Hilda trilogy from Simon at Stuck in a Book.

This book also reminded me of the trip I took to England in 2018 with my mother, which was mostly a Jane Austen pilgrimage but did include several churches and cathedrals -- we didn't make it to Canterbury but we did visit St. Paul's in London (I climbed all the way to the top!), Bath Abbey, Salisbury Cathedral, and Westminster Cathedral, where Jane Austen is buried. Just for fun, I'm including a few photos.

Jane Austen also gets a mention in The Hireling which amused me terribly:

Putting one hand behind his back, he squared himself in front of the tablet. When he had finished reading, Lady Franklin said:

'I don't think she was kind hearted, do you?'

'I couldn't say, my lady," Leadbitter said cautiously. It wouldn't surprise me if she wasn't.'

'Why?'
'Because with one or two exceptions,' and his voice faintly underlined the words, 'ladies aren't very kind-hearted, in my experience.'

'Oh, would you say so?' Lady Franklin said, made thoughtful by the compliment. 'Perhaps we haven't a very good name for it.'

'It makes the others stand out,' said Leadbitter obliquely.'

Lady Franklin couldn't but lap up this repeated dewdrop.

'How sweet of you!' she said. 'I'm afraid I don't deserve - But Jane Austen had many qualities more valuable than kind-heartedness. At least, more valuable to posterity.'

'I expect she was a tartar in her time,' ventured Leadbitter.

I don't know that I've ever heard Jane Austen described as a tartar but I know she had a biting wit and there are some real zingers in some of her letters, so it's quite possible. And here is the tablet itself, and the plaque on the adjacent wall, commemorating the great author: 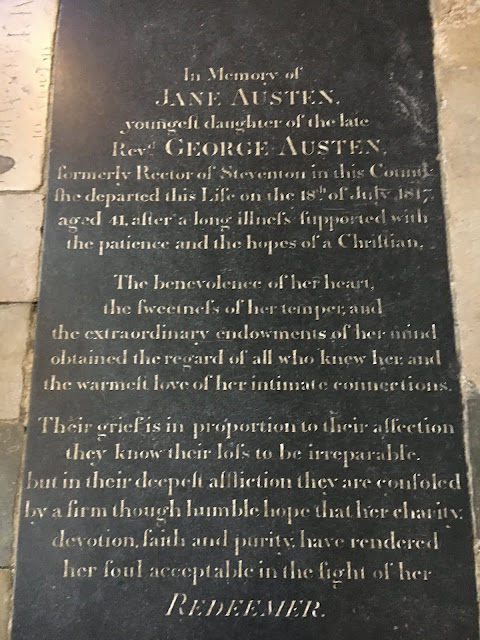 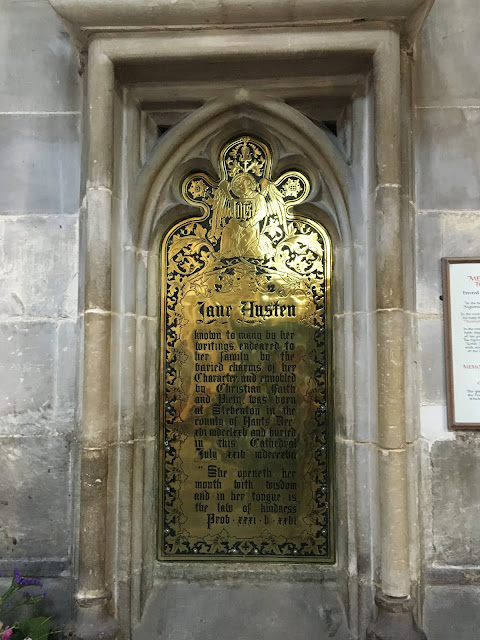 So -- a good book, a little armchair traveling, and another book crossed off my Classics Club list! I've finished 27 of 50 on my second list, and I hope to finish more this summer. Did everyone enjoy your Classics Club spin picks? And how are your lists coming along?
Posted by Karen K. at 12:51 PM