The Professor by Charlotte Bronte; and some photos of Brussels 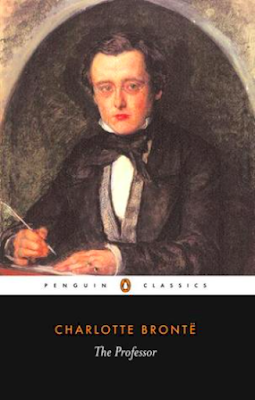 A couple of weeks ago I was looking for an audio book to listen to while walking the dog (I have Overdrive accounts with FOUR libraries so I can always find something good!). One of the libraries had an audio of The Professor, Charlotte Bronte's first novel. I'd hadn't been particularly interested because I wasn't thrilled with Villette, but I saw that the narrator was the brilliant Frederick Davidson (who brilliantly narrated Les Miserables and many other books) so I gave it a try -- and as it's set mostly in Brussels, I can count it for my Belgian read for the European Reading Challenge!
Posthumously published in 1857, The Professor was written before Jane Eyre and submitted and rejected by several publishers. It was published after her death with permission of her husband, and is based on experiences she had studying in Brussels in 1942.
I had assumed that the eponymous Professor would be an old man, but in fact he is a young man named William Crimsworth. The book begins with him writing a letter to an old school friend, but that framing device is quickly abandoned and the story is then simply told in the first person. I guess it's basically a Bildungsroman, a story of a young person's coming of age.
Crimsworth, an orphan, is about 20 when the story begins. His late mother was from a wealthy family, but was disowned when she fell in love with -- gasp! -- a tradesman, who is also dead. After his mother died, one of his relatives basically blackmails his uncle (his mother's brother) into paying for William's education at Eton. The same uncle then offers him a living if he'll agree to enter the church, and to marry one of his cousins. William declines. 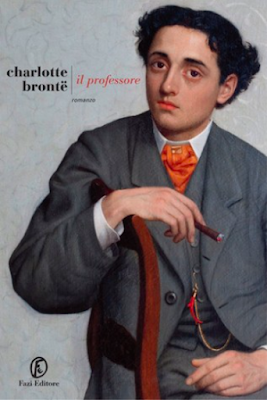 Obviously William then needs a job, and looks up his much older brother Edward, who took over their late father's mill. Before their father's death, the mill had failed and was sold, but Edward stayed in the business by marrying the new mill owner's daughter, and eventually took over. William writes to his brother and asks for a job, and Edward agrees, only since William has broken ties with their mother's family forever. William then travels North to a nameless town and takes a job as a clerk to his rather begrudging brother, who tells him upfront not to expect any special treatment. He only gives William the job because William can read French and German. William seems to be an upstanding citizen and model employee, which seems to infuriate Edward who is extremely jealous of William's education.
A chance encounter with one of Edward's business associates, Hunsden, tips Edward into a rage and William quits. Hunsden then suggests William try his luck on the continent, and gives William a letter of introduction to someone in Brussels, who helps him find a job teaching English at a boy's school.
Eventually, William also takes on a part-time job teaching at an adjoining girls' school, where he develops a crush on the headmistress, Mademoiselle Reuter. She toys with his affections and eventually develops feelings for another one of the teachers, Mademoiselle Henri, who teaches lace-making but also begins to attend William's English classes.
The Professor isn't a very long book for a Victorian, about 300 page depending on the edition. It's really a book in which not much happens, and it definitely feels like a first novel, or one that's unfinished. (I finished it about a week ago and already had to look up on Project Gutenberg to find out what happened in the end. Bronte seems to take a lot of time describing people's looks and their characters, but there isn't a whole lot of plot. Still, it's interesting to read one of her early works, and Frederick Davidson was a wonderful narrator, as always. I don't know if I'd recommend it if you're not a big fan of Victorians.
And now for a few photos! When I lived in Germany, we were only a few hours' drive from Belgium, and made several trips to visit, mostly for weekends. It's a highly underrated country -- the scenery is pretty and the food is excellent. I visited Antwerp, Bruges, Brussels and Ghent on separate visits. They're all different and I loved them all. We went for a weekend in the fall of 2018, and had a lovely time. It's often overcast so it looks dreary in some of the photos, but it was great for a weekend.
The first thing we did was visit the Atomium, left from the 1958 World's Fair. So mid-century! 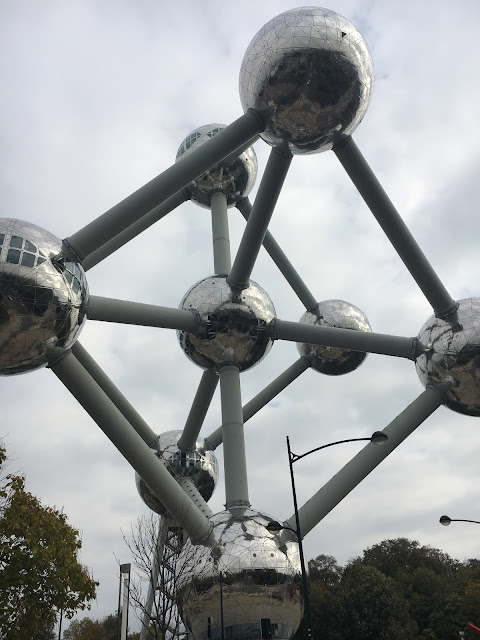 Right next to the Atomium is Mini Europe, and of course we bought a combined ticket. Lots of iconic European buildings, on a much smaller scale. Here's mini Pisa with the Atomium in the background. You can see mini Venice on the right. 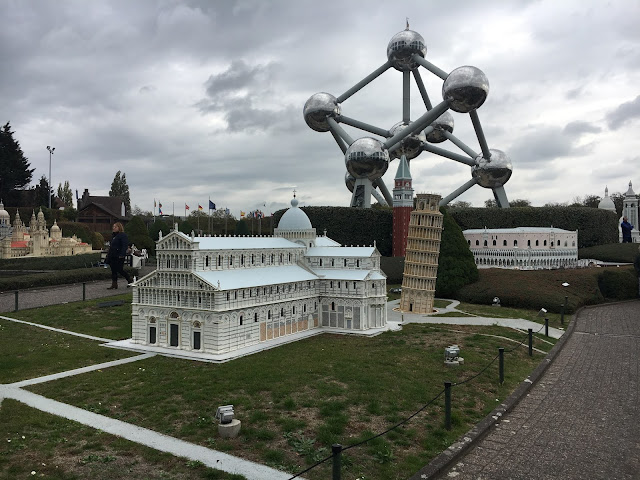 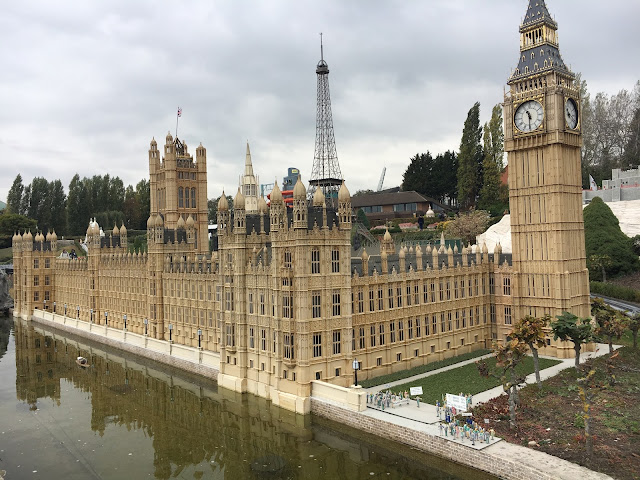 Mini Houses of Parliment, complete with a fake Thames. 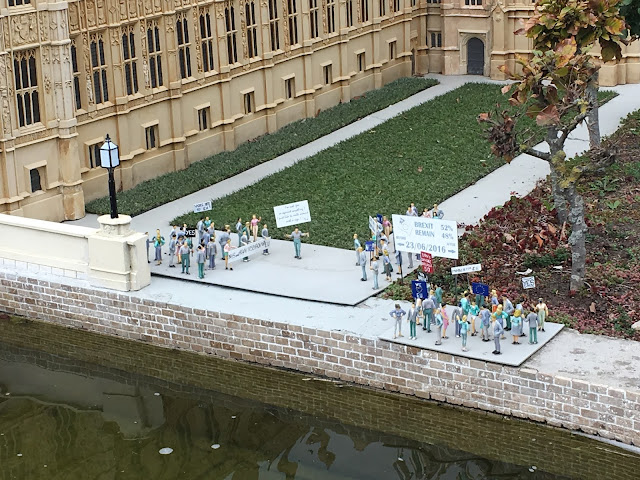 Love the detail of the mini Brexit protest! 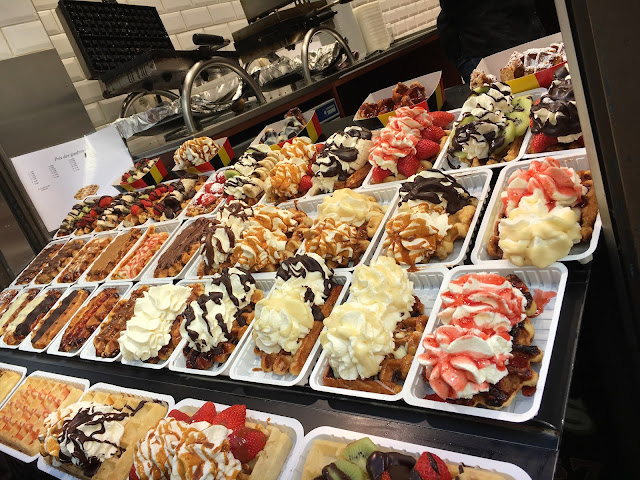 Of course we had to sample the local cuisine. Look at all those amazing waffles.
Our hotel was a short walk to the Grand Place, the central Plaza of Brussels.
Lots of beautiful architecture (and chocolate shops). 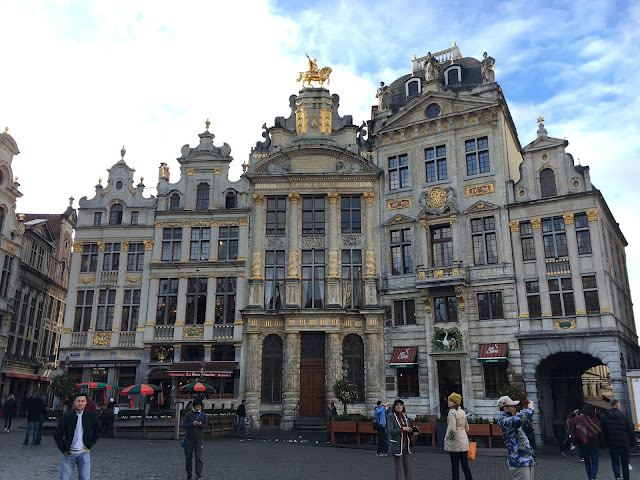 Walking past the square I spotted this amazing trompe l'oeil tribute to the iconic Tintin: 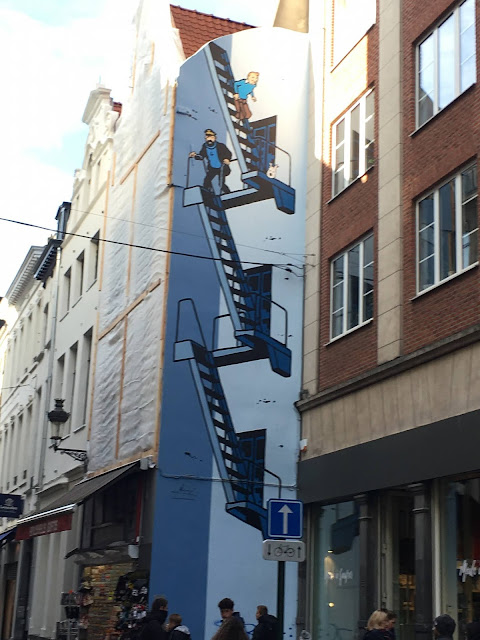 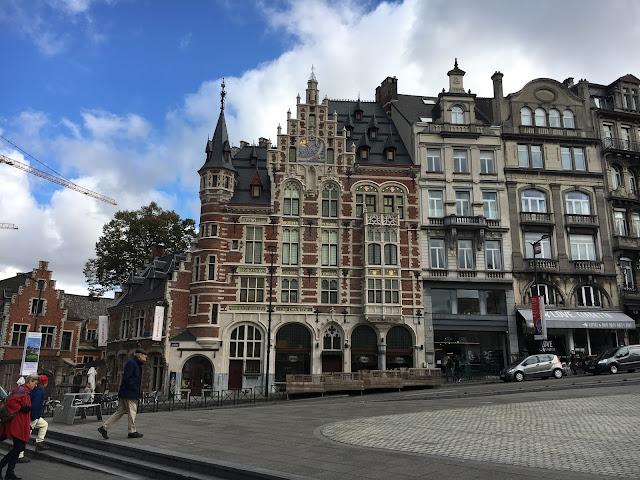 I just loved the architecture in Brussels. 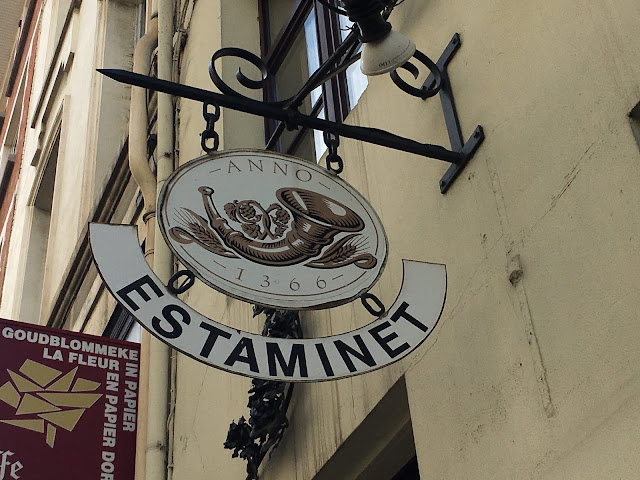 It just blows my mind that this business was established 500 years before I was born.
Brussels also has some wonderful art museums.
First we went to the Magritte Museum, lots of amazing surreal paintings. 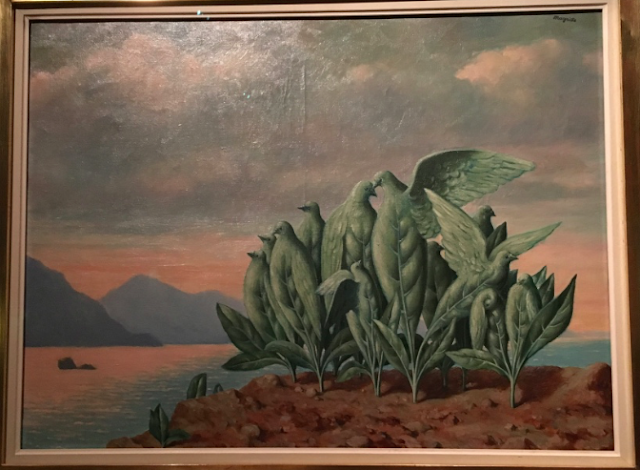 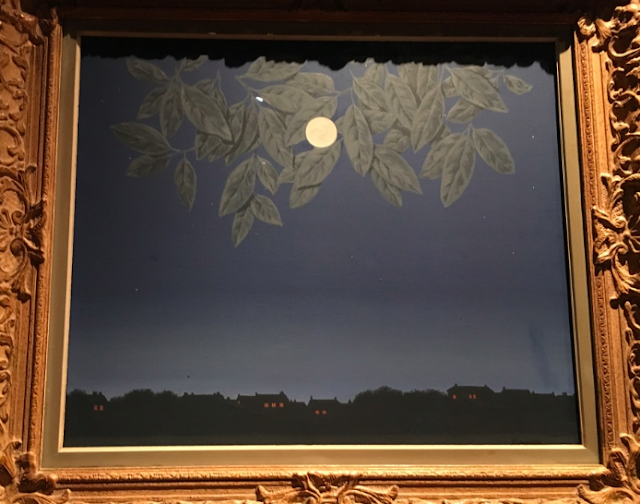 Then we went to the Royal Museum of Fine Arts. I discovered that I absolutely love the works of Pieter Brueghel. Here's The Fall of the Rebel Angels from 1562. I can only imagine what the reaction to this must have been. 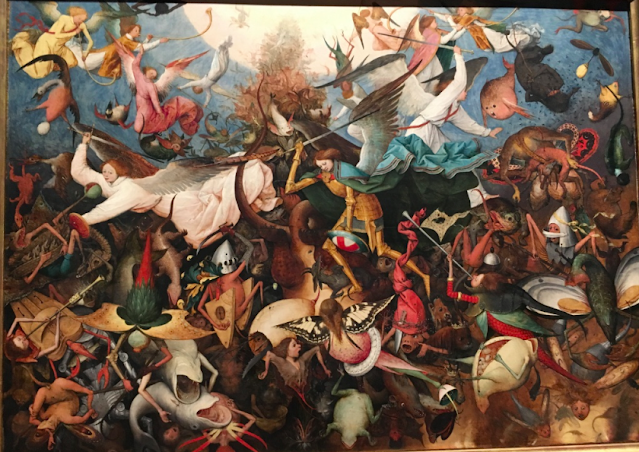 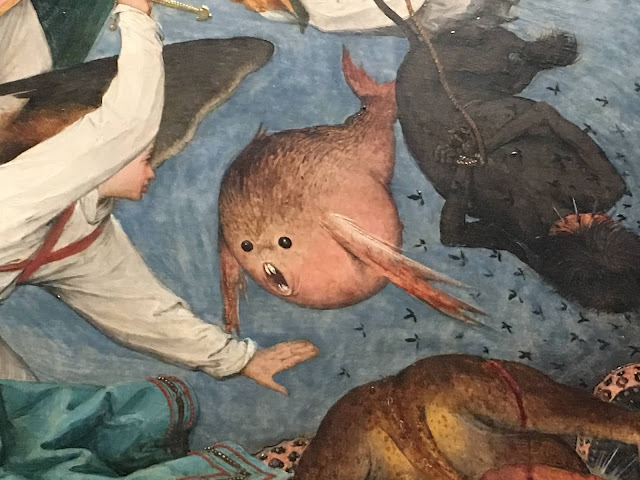 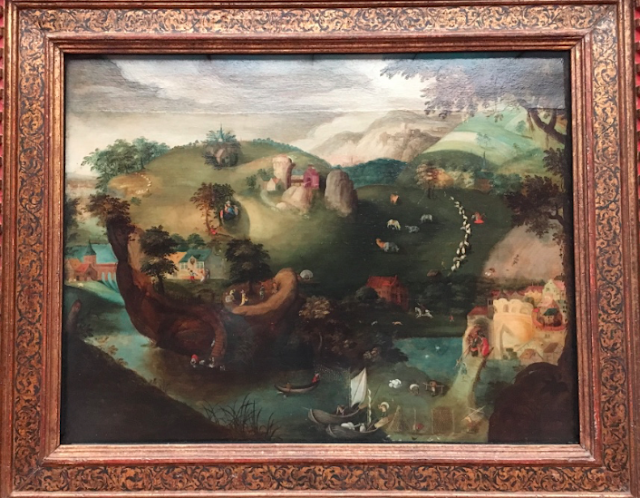 I loved this anthropomorphic head of a woman. There's a matching painting with a man. No artist attributed, but it reminds me very much of the vegetable paintings by Arcimboldo. 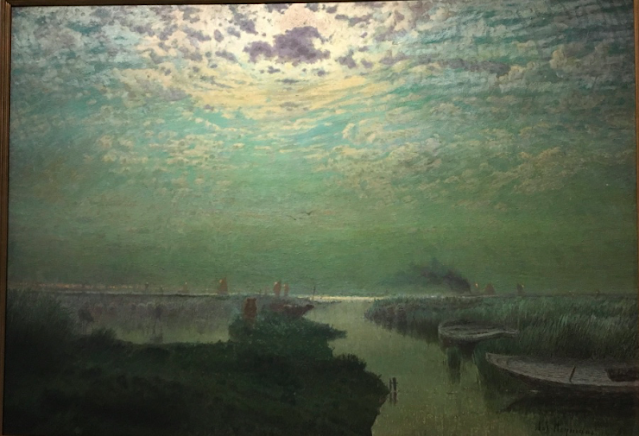 Lots of beautiful later paintings as well. I always love finding new artwork I'd never heard of.
This is Moonlit Sky by Adrien-Joseph Heymans, c. 1907.
Brussels also has beautiful Art Nouveau architecture. My last stop was the Horta Museum, a beautifully preserved Art Nouveau house designed by architecht Victor Horta (circa 1898). It's the two buildings on the right with the matching grillwork around the windows, to the right of the striped building. They only let in a few people at a time, even pre-COVID. Luckily the line wasn't long. 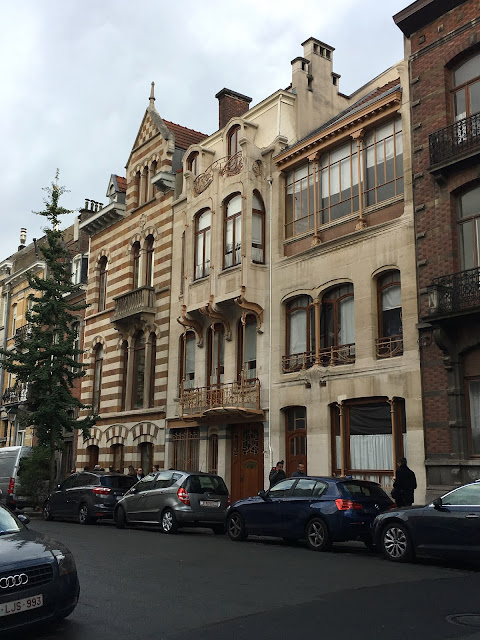 They don't allow photography inside but you can see images of the interior here.
I really like Belgium and would happily visit again. For next year's challenge I'm hoping to read something by an actual Belgian writer, possibly Georges Simenon who wrote the Maigret mysteries. I would love recommendations if anyone is a fan.
I'm counting this as my Belgian read for the European Reading Challenge.
Posted by Karen K. at 2:11 PM