The Dancing Bear by Frances Faviell; and a trip to Berlin 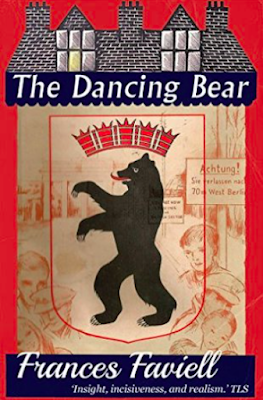 I love the Furrowed Middlebrow reprints and though I prefer print books when I can get them, I've been tempted more and more often by the instant access to e-books. The entire Furrowed Middlebrow catalog are available on Kindle and some of them are included with Kindle Unlimited. There's a promotion right now, 99 cents a month for two months, so I couldn't pass it up and downloaded two books by Frances Faviell, The Dancing Bear and Chelsea Concerto. Not realizing that these were nonfiction, and sequential,  I started with The Dancing Bear, Faviell's memoir of her life in Berlin just after the end of World War II. (A Chelsea Concerto is her memoir of living in London during the Blitz, and I actually should have started there).
The book begins shortly after Faviell, an artist, and her little son John join her husband in the British sector. The book begins with a chance meeting with a German woman, Frau Maria Altmann, who is struggling with a cart of goods at a busy intersection. Faviell is in her car but stops to help, and seeing the Union Jack, the local police stop traffic and passersby assist the woman, who is waiting for her son Fritz. Frau Altmann refuses the offer of a ride, since it is forbidden, but Faviell insists after Frau Altmann faints on the street.
This marks the beginning of a close friendship between the author and a struggling German family during the difficult first years of the British occupation and the reconstruction of Berlin in a divided Germany. Frau and Herr Altmann are trying their best to hang on to their pre-war life, though they have hardly any food or fuel in a terrible winter. Their oldest son Kurt was sent to fight in Russia and hasn't been heard from in years, though they refuse to admit his death; oldest daughter Ursula is supporting the family working as a black-marketer; frail Lilli is a dancer with the ballet; and the youngest, Fritz, is rebellious and sulky.
Faviell does what she can to help the family (along with her faithful and tender-hearted driver, nicknamed Stampie), but there are so many needy people and sick children, she is sometimes overwhelmed. But it's clear she made a huge difference in the lives of the Altmanns and others.
. . . these women clung, in spite of all the horrors they had undergone, to the conventional -- or was it that they thought their only safety lay in the resumption of the conventional pattern of life?
I liked this book but parts of it were hard to read, especially with the cold snap we had last week -- I couldn't help imagining a frigid winter with no heat and little to eat, poor shoes -- it must have been a terrible time. I suppose it wasn't the best timing to read it now, but sometimes I find that books about the war make me grateful for what I have.
I was lucky enough to visit Berlin for a long weekend in 2018. It was actually my second trip there -- back in the 1980s, I spent a few weeks in Europe with my sister and we stayed with a German friend of hers in West Berlin when it was still divided. We were even able to cross the border into East Berlin for a day, which was rather eerie and a little scary. It's incredible how much it has changed since then. We had a wonderful time on the last trip and I wish I could have seen more. We managed to pack a lot into three days. 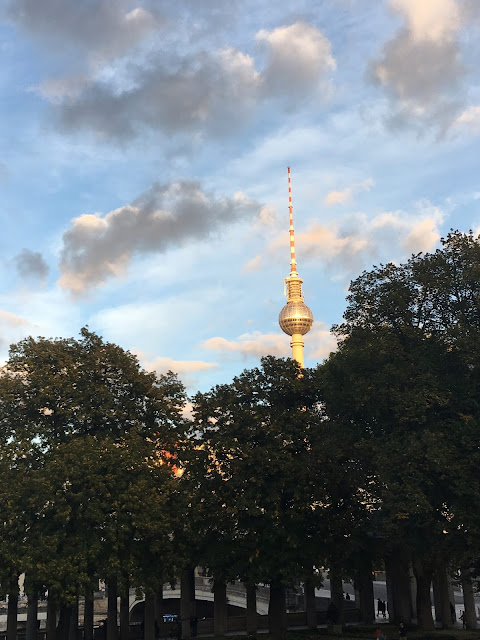 The iconic Berlin TV Tower from 1969.
Sadly we didn't have enough time to go up and admire the view.

I loved Berlin and wish I'd had more time there, it has so much history and culture.
Parts of Faviell's book were a tough read, but I found it fascinating and hope to read more of her books soon. Next up for me will be A Chelsea Concerto, about her life in London during the war, then some of her fiction set in Germany. I'm signing up for a World War II reading challenge for next year so I'll definitely be reading some of them.
I'm counting this as my German book for the European Reading Challenge.
Posted by Karen K. at 3:18 PM