The Street by Ann Petry 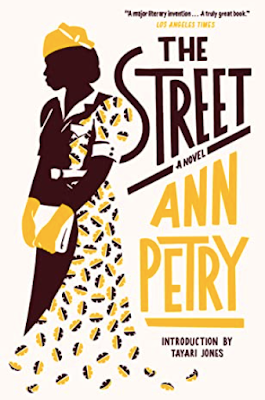 Streets like the one she lived on were no accident. They were the North's lynch mobs, she thought bitterly; the method used to keep Negroes in their place. And she began thinking of Pop unable to get a job; of Jim slowly disintegrating because he, too, couldn't get a job, and of the subsequent wreck of their marriage; of Bub left to his own devices after school. From the time she was born, she had been hemmed into an ever-narrowing space, until now she was very nearly walled in and the wall had been built up brick by brick by eager white hands.
I have often referred to books as Fascinating Trainwrecks -- about people who make one bad decision after another, rushing headlong towards disaster. They are often horrible people, yet so well written that I cannot stop reading (think Anna Karenina, and most of Zola).
And then we have characters like Lutie Johnson in The Street by Ann Petry. Lutie, a young Black woman in the 1940s, works hard, scrapes, and saves, and does everything she's been taught to do to get ahead in life -- and she just can't catch a break.
Set in Harlem during WWII, The Street is the story of Lutie Johnson, a young single mother living just trying to make a living for herself and her eight-year-old son, Bub. Bub's father left Lutie after months of her living in Connecticut, working as a cleaner for a rich white family. She only saw Bub and her husband once a month, if that, and sent them all her wages. The separation, and her husband's inability to find a job, was the death toll for their marriage, and Lutie needs to find a new place to live since she can't keep living with her father and his girlfriend, who are a bad influence on young Bub. 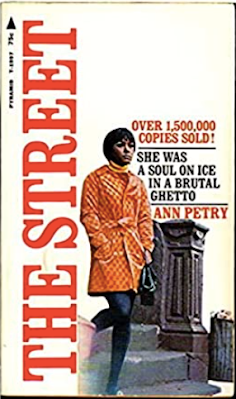 This cover is sooo 1970s.
The story begins with Lutie examing a dark fifth-floor walkup apartment that she can afford -- with a creepy landlord named Jones. Right away I knew he was trouble, he made me SO uncomfortable. I'd actually started reading this in the summer but Jones gave me such a bad feeling I stopped for several months. I'm glad I got the courage to keep reading about Lutie, because her story is so compelling.
We learn the back story of her marriage and separation, and how she manages to land a civil service job. But Lutie is desperate to move to a better apartment, in a better neighborhood, away from Jones and some of the other sketchy residents of the building, like the Mrs. Hedges, the Madam on the first floor who watches everyone coming and going, and keeps offering to introduce Lutie to men who would appreciate her friendship, so to speak.
Things finally seem to be looking up for Lutie when she starts singing to herself one night in a crowded bar, where she's gone for a much-needed break and a beer. A good-looking but slightly sketchy-looking man named Boots asks her to audition to sing with his band. Lutie thinks this could be her break, but naturally, things don't work out as she hopes -- the conclusion takes a pretty shocking twist.
The Street is Lutie's story, but it also interweaves the back stories of Boots, Mrs. Hedges, Jones, and some of the other characters. It's a tragic tale that really couldn't have turned out any other way, and it's not very optimistic for anyone who isn't white. It was published almost eighty years ago, but it feels very contemporary in the writing style, and it's a fast, absorbing read.
This book had been on my periphery for a few years, but I'd never really heard that much about it or about Ann Petry. It became a bestseller, and The Street was the first book by a Black woman to sell more than a million copies. Nevertheless, there are less than 8,000 ratings for it on Goodreads -- compared to more than 250,000 for Their Eyes Were Watching God and 150,000 for Invisible Man. I don't know why this doesn't get the attention it deserves. Parts of the story must have been shocking when it was published in 1946, but Bigger Thomas in Native Son is worse, an actual trainwreck. Lutie does everything she can to pull herself out of a bad situation, and it still all goes wrong. It was so frustrating to read how she could not catch a break and had so little say in her own situation, by society and by individual people working against her.
The trouble was with her. She had built up a fantastic structure made from the soft, nebulous cloudy stuff of dreams. There hadn't been a solid, practical brick in it, not even a foundation. She had built it up of air and vapor and moved right in. So of course it had collapsed. It had never existed anywhere but in her own mind.
The Street is a masterful tale of the unfairness of life for women of color in the mid-century. And for many women just like Lutie, things haven't gotten much better.
I'm counting this as my BIPOC classic for the Back to the Classics Challenge.
Posted by Karen K. at 10:23 AM

Labels: Back to the Classics 2020, BIPOC, mid-century, Virago