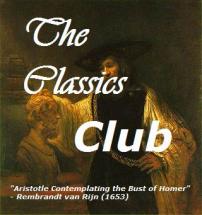 I saw on Goodreads that there's a new Classics Club, run by Jillian of A Room of One's Own.  I adore making lists and I have a ton of classics on the TBR bookcase, so this was a no-brainer.  At first I was just going to choose 50 from my own books, but that would be too easy. (Plus including 15 works by Trollope does make the list run over.)  So I decided to expand it to 75.  I'm sure I can read an average of 15 classic books per year.  So here's my current lineup -- of course, it could change, and it will probably grow longer.  I'm including two books (Framley Parsonage and The Fountain Overflows) which I've technically started already, but I've made so little progress with either I think it's fair.   A lot of these are on my 2012 challenge lists so this will give me added incentive.  Click here for specifics and to sign up.

I hope to finish this list by March 24, 2017.  That gives me just over five years to complete the list.  I really don't know that I deserve any special rewards for finishing these, but Amanda at Fig and Thistle gave me the idea of purchasing Penguin Clothbound Classics -- one for every five completed?  I do love those beautiful covers!

Titles in blue are from the TBR shelves.

So how are my choices?  Any I should delete, or start reading right away?
Posted by Karen K. at 7:52 AM