The Kill by Emile Zola; and a painting by Edouard Manet 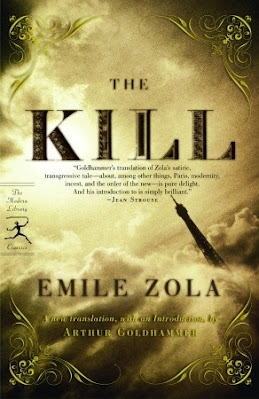 This weekend, while on a flight to our nation's capital, I finally finished my seventh book by Zola: The Kill, the second of his Rougon-Macquart series.  I have to admit, I was a bit disappointed in this book.  The last three novels I read by Zola were so well crafted and such great stories that I expected this to be just brilliant.

Here's the setup.  This is the story of a really unpleasant couple, Aristide and Renee Saccard, during the French Second Empire.  Aristide is in his fifties and is a frenetic, scheming financial speculator who is making money hand over fist by buying Parisian properties and selling them to shell companies.  He has all kinds of shady government connections and gets these properties to be massively overvalued; then, he cheats the government out of millions of francs by selling the properties to the government, because they're going to be knocked down in a frenzy of urban renewal.  (The government is about to tear down tons of old buildings to put up new ones and create the current grid layout of Paris with the wide avenues, etc.)  Of course, he's also living on the edge because he's constantly on the verge of financial collapse.

Aristide's wife, Renee, is twenty years his junior, and after the untimely death of his first wife, he married her upon the advice of his shrewd sister.  Renee was a young woman of good family who is in a fix, so to speak, so her father marries her to nasty Aristide with a huge dowry to save the family's reputation.  Aristide takes her money to start his career as a financial speculator.  Ten years later, she's shallow and bored, and things take a turn for the dangerous when she decides to take a new lover -- her handsome stepson who's only seven or eight years her junior.

Basically, the story is a whirlwind of parties, greed, and incest, and if you've read anything by Zola, you know how things are going to turn out.   It was an interesting story, and like most of his other books, the characters aren't particularly sympathetic, and their behavior is pretty shocking.  Last year I read three novels by Zola in pretty quick succession (Germinal, #13 in the series; Pot-Bouille (Pot-Luck); #10, and La Bete Humaine, #17).  It was pretty obvious that The Kill is a much earlier work.  I really found the plots and character development much better in the later books, and although the satire and political commentary is present in all of them, I thought it was much more masterfully done in the later works.  Zola kind of beats you over the head with it in The Kill.

Also, there are frequently awful characters in all the books, but in the later novels, the stories are so well crafted that I couldn't stop reading them.  In The Kill I just found them to be wretched people living to excess and not nearly as well developed as the later books.  It's still an interesting book, but it just made me want to read more of the later stuff.  (By the way, #3, The Belly of Paris, was my first Zola, and I liked it, but I think the best bits were the food writing.  It was a good choice for a first Zola since I wasn't able to start with #1, The Fortunes of the Rougons; a new translations by Oxford World's Classics will be published in August.)

And now for the Manet connection.  As I mentioned, I finished this book on a flight to Washington -- it was the end of Spring Break so I got to spend a couple of days with family in Maryland.  Yesterday, we decide to visit the National Gallery, and as I was passing through the French Impressionist rooms, I stumbled upon a group with a docent who was discussing this picture by Edouard Manet: 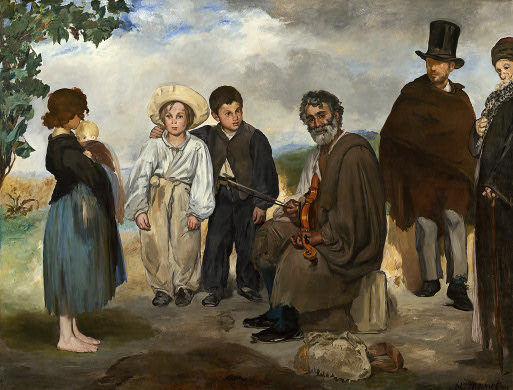 It was painted by Manet during exactly the same period that Zola was writing about!  Apparently, it was controversial because it's a great big picture, about 6'x8', and it's not just a great painting, it's a social commentary.  At this time, the subjects of enormous artworks like this were always classical or Biblical.  These people are homeless and in the country, which would have been a shocking subject for that time period.  The girl on the left is probably an unwed mother, plus we have two street urchins, and the man on the right in the top hat is called the absinthe drinker because he's in another picture by Manet with that name, so we know he's probably an alcoholic.


Basically, all these people are homeless and in the country because of . . . . urban renewal during the Second Empire!!  So here is Manet painting a picture and making social commentary about the very same subject as Zola!  I mentioned Zola's book to the docent and she was familiar with it.  She also reminded me that Zola was friends with some of the Impressionists, including Manet, who painted Zola's portrait in 1868; and Cezanne, his childhood friend, who is the subject of Rougon-Macquart #14, The Masterpiece.   So there you have it, literature and art colliding.  My visit to the National Gallery was absolutely serendipitous and I think now The Masterpiece will be the next Zola on my to-read list.
Posted by Karen K. at 5:19 PM