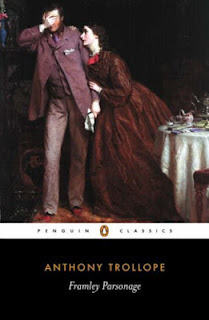 Finally!  I've had this book out from the library for weeks, probably since I finished Dr. Thorne in January.  Seriously.  I started a couple of chapters weeks ago and then didn't really read it until about a week ago.  Once I got started, I was really rolling and finished it in about five days.  I can hardly say that about Dickens!

This is the story of two families, the Luftons and the Robards.  Mark Robards, the son of a respected doctor, is the childhood friend of Ludovic Lufton, a young lord and the heir of Framley.  When Mark and Ludo are still young men, the living of the parsonage at Framley becomes available, so Lady Lufton, Ludovic's mother, gives it to Mark, basically setting him up with a good job for life at quite a young age.  She also finds him a nice wife, Fanny, the best friend of her daughter.

However, Robards is still very young and rather foolish.  He starts mixing with some of Lord Lufton's swanky friends, to the disapproval of Lufton's mother, his patroness.  One weekend Mark attends a house party with some mutual friends, to the very great disapproval of Lady Lufton.  She has the right idea -- Mark is persuaded by a rich spendthrift named Sowerby to co-sign an IOU for 400 pounds (which he, Mark, doesn't actually have).  According to the Trollope website, in today's dollars that's the equivalent of about $25,000.  (Yowza!)  Mark doesn't mention this to his wife, since Sowerby is convinced he's going to marry Miss Dunstable (the rich heiress previously introduced in Dr. Thorne) and he'll be able to make the debt good himself in a couple of months, and it won't cause Mark a bit of trouble.  Ha!  Of course nothing does as planned and Mark is on a downward spiral of debt when he never even used a penny of it for himself.  Following all this so far?

Meanwhile, Mark's father has died, and though this might have saved the day if there was any money to inherit, it adds a different wrinkle to the story.  Mark's charming younger sister Lucy comes to live at Framley Parsonage.  Though she's described as "little and brown," she's quite delightful, and his friend Lord Lufton starts to become friendly with her, to dismay of his mother.  Lady Lufton wants nothing more than for her son to marry Someone Of Consequence; money isn't an issue for the Luftons, like we saw with the Greshams in Dr. Thorne, but LL still wants her son to marry someone impressive.   She's jockeying to get him married off to Griselda Grantley, the daughter of Archdeacon Grantley from The Warden and Barchester Towers.  Griselda is beautiful and rich, but doesn't seem to have much personality.

Meanwhile, there's some political stuff that I found very confusing and honestly, I skimmed parts of it.  Trollope does tend to ramble on about politics, and since I don't know the history, it really meant nothing to me. (I suspect this might get worse when I start reading The Pallisers novels, many of which are in the 800-page range).   Essentially I think there was some kind of vote of no confidence in the current Parliament, and people were in and out of the government.  Plus, Sowerby is trying to get re-elected for Parliament, despite the fact that he's about to lose his estate and his shirt because of all his bad debts.

The best thing about this book was the relationships between the people at Framley Parsonage itself.  Lady Lufton is bossy, but not a monster, and Mark's wife Fanny and his sister Lucy are just wonderful characters.  For a Victorian novel, there's a lot of strong, admirable females -- it's mostly the male characters that are making complete asses of themselves.

At the end, naturally, it all works out and most everyone is happy.  That's another difference between Dickens and Trollope.  With Dickens, the main characters usually turn out all right, but people always die and it's more melodramatic and tragic.  Trollope is closer to Jane Austen in that the endings are fairly happy and the bad people usually get comeuppance.  At any rate, that's what's happening in the Barset series so far.

I did like this book but not quite as much as Dr. Thorne -- the kerfuffle over Lady Lufton and Lucy was sort of a repeat of the situation in Dr. Thorne, and some of the political stuff was sometimes boring.  However, it was definitely worth reading.  I have two more novels in the series left,  and they're both whoppers -- The Small House at Allington is about 700 pages, and The Last Chronicle of Barset is more than 800!  Still, I hope to get to them sometime this year.

Bloggers, has anyone else read the entire Barsetshire Chronicles?  Which did you like best?
Posted by Karen K. at 10:04 PM