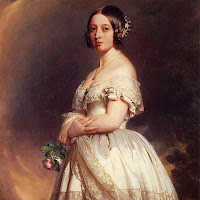 In my last posting about Dickens miscellany, Anbolyn mentioned in the comments that I should read Our Mutual Friend next because the brilliant author Sarah Waters' included it in her top 10 Victorian novels list.  Well, if you've read this blog, you know how much I love lists, so I had to compile my own Top 10 Victorians list!   I think I've reviewed nearly all of these since I started blogging in 2009.  They're ranked, but really close together, since I love them all.

1.  Jane Eyre by Charlotte Bronte .  The first Victorian I ever loved, so it has to be on the list.  I reread it again last year in preparation for the newest movie adaptation, and I still loved it.  There's something to be said for a novel that you love in your teens and again years later.

2.  Bleak House -- by far my favorite Dickens novel.  It has everything -- satire, comedy, melodrama, mystery, murder, and one of the first detectives in English literature.  It's a doorstop, but so worth it.


3.  Barchester Towers by Anthony Trollope.  The second in the delightful Barsetshire Chronicles.   It showcases  the best of Trollope's delightful arch humor, a comedy of manners in a country parsonage.  But do take the time to read The Warden first;  it's a little slow, but it's short, and Barchester makes more sense if you read them in order.

4.  Wives and Daughters by Elizabeth Gaskell.  The basis of one of my favorite BBC miniseries ever, just the thing when you've finished all of Jane Austen and are in mourning because she only wrote six novels.  Also includes one of my favorite lines:  "I won't say she was silly, but I think one of us was silly, and it wasn't me."  Priceless!

5.  The Way We Live Now by Anthony Trollope.   Another Victorian doorstopper, but fascinating.  It's an extremely timely tale of boom and bust in the Victorian era, with a very familiar Madoff-like character.  It's 100 chapters, but an amazingly fast read.


6.  Three Men in a Boat  by Jerome K. Jerome.  A very funny picaresque novel in which not much happens.  Imagine if Bertie Wooster went on a boat trip with two equally clueless friends, but left Jeeves behind and took a fox terrier instead.  A lot of digressions and amusing observations on life.  I've read it and listened to it on audio multiple time and it still cracks me up.

7.  Middlemarch by George Eliot.  It's a little dry at first, but the last 700 pages are really good.  Does that sound strange?  A great story about several families in a country village -- sounds a little like Jane Austen but it also includes social commentary about the status of women, politics, hypocrisy, religion and a whole lot more.  Closer to Trollope than Austen.

8.  Oliver Twist by Charles Dickens.  It has all of Dickens' trademark melodrama and it's a great introduction to his early writing. Also fairly short if you have Fear of Dickens.

9.  The Woman in White by Wilkie Collins.  A great page-turner of a thriller, one of the first murder-mysteries in English literature.  It's a Victorian sensation novel, but so much more.

10.  Lady Audley's Secret by Mary Elizabeth Braddon.  It's not great literature by any means, but a great page-turning story.  It set the standard for the Victorian sensation novel and has never gone out of print.

Well bloggers, what do you think?  Are any of these on your favorite lists?  Which ones make you want to scream and throw the book across the room?  Which Victorians are your favorites?
Posted by Karen K. at 9:34 PM