After finishing Martin Chuzzlewit in a burst of reading energy last week, I'm worn out.  I need to start working on Zola for an online book discussion I'm leading, and I've now renewed Framley Parsonage TWICE from the library, so I need to get moving on that too.  But here are a few bits about Dickens that I forgot to include last week. 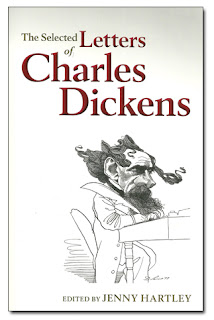 First of all, many thanks to Elaine of Random Jottings!  I was the winner of her Dickens Letters Prize Draw, which absolutely made my day.  Many apologies for not mentioning it before.  And do visit her delightful blog (which includes lots of related posts, about Dickens, gardens and tons of other fun stuff.)  Can't wait to read this!

Now that I've finished Chuzzlewit, I need to look back at all my Dickens reads and re-rank them.  The top has remained unchanged:

The middle four now includes my latest read.  These are in no particular order, all pretty good, but not my favorites for various reasons:

9.  Dombey and Son -- not terrible, but seemed really, really padded.  Could have used some serious good editing.

10.  Hard Times.  Just dreadful.  Preachy, characters unlikeable, nothing funny or interesting about it.  It's the shortest work because all the good stuff was left out.  Of course by comparison, everything else Dickens wrote is pretty good or just plain wonderful.

And for a little bit of Dickens amusement. . . . Doctor Who meets Charles Dickens!


This is the only clip I could find on YouTube.  It's #5 of these top 9th doctor moments, a clip from "The Unquiet Dead" in which Rose and the Doctor go back to Victorian London and meet Charles Dickens.  Fast-forward to about 5:45 for the first meeting with Charles Dickens.  At about 6:40 the Doctor makes a wisecrack about Martin Chuzzlewit that I find really amusing.

Finally . . . which Dickens should I read next?

Now I have six more works by Dickens to complete the oeuvre.  I'm going to take a break, but which Dickens should I read next?  I have four left on the TBR shelf, so I'd like to choose from one of those.  Here are the choices:

I'm leaning toward Edwin Drood, because the BBC adaptation is showing here in the States pretty soon, plus I also have a copy of Dan Simmons' Drood on the TBR shelf, and I want to read the original first.   Bloggers, what do you think?
Posted by Karen K. at 11:02 PM