Few Eggs and No Oranges by Vere Hodgson 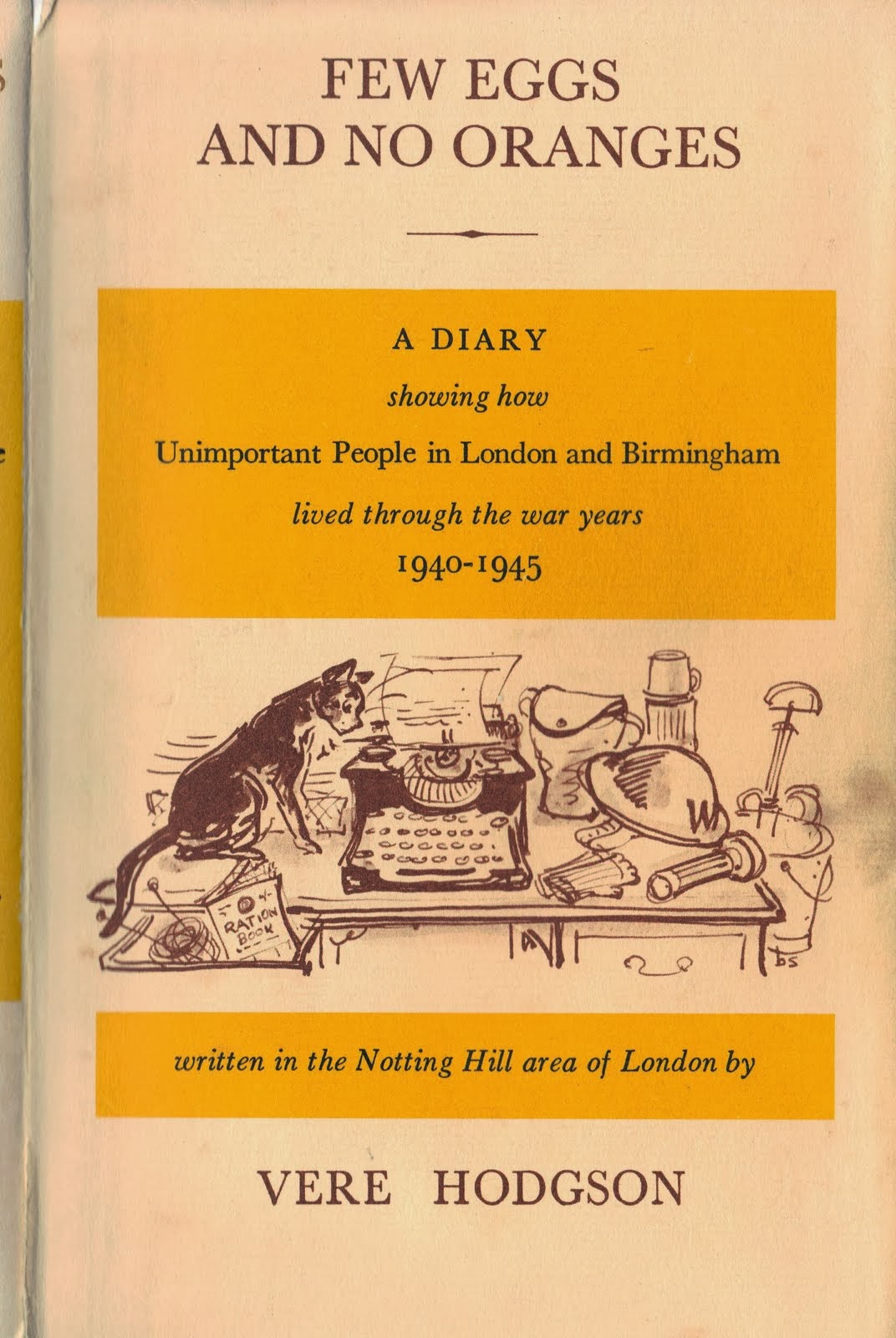 Persephone book #9 is Few Eggs and No Oranges: the Wartime Diaries of Vere Hodgson, 1940-1945.  It's probably the longest Persephone book own, nearly 600 pages, and the actual time I spent reading this book was by far longer than any other Persephone, which I can normally get through in a few days, sometimes even as little as one day (and there are those that I've literally finished in one sitting). This book took me more than six weeks, because I had to read it in bits and pieces -- I just couldn't sit and read long sections at once.

Vere Hodgson (1901-1979) was born in Birmingham and was working at a charity in Notting Hill Gate during WWII.  Few Eggs was first published in 1976, an abridged version of Ms. Hodgson's diaries from the war years, which she sent to relatives in Rhodesia during the war.  Since I'm really interested in the War at Home, I thought this would be just up my alley.  Well, it was and it wasn't -- I was really not prepared for how difficult a read this book would be.  It's one thing to read fiction, but true stories are always more painful to read.  The first year or so of the book covers the London Blitz, and much of this portion of the diary is entry after entry of days when Vere literally did not know if she would live to see another day -- bombs dropping, sirens blaring every night, mad rushes to the bomb shelter -- seriously, I don't know how millions of people lived through it every day and didn't lose their minds.

And then the survivors had to deal with the destruction, the short rations, and constant fear -- plus the sleeplessness would have sent me around the bend.  People must have developed nerves of steel.  However, the book also includes a lot of lighter moments.  By far, my favorite parts were about the extraordinary kindness that the British people showed to one another -- over and over there are instances of people sharing what little they had with strangers, especially soldiers.

As I read the book, I only wished I had better knowledge of WWII history -- I know the basic outlines, but I feel like I need to go back and reread all the war history that I've forgotten.  Anyway, this is quite an interesting look at the life of someone who lived through the war.

I couldn't use this as my Classic About War selection for the Back to the Classics Challenge, since it wasn't actually published until 1976, but still have a lot of books about WWII on my TBR lists -- I have another book in the Cazalet series, Suite Francaise by Irene Nemirovsky, which I really want to read, plus I might read The Moon is Down by John Steinbeck.  Bloggers, which are your favorite books about WWII?
Posted by Karen K. at 10:08 PM