Crome Yellow: If Barbara Pym Visited Downton Abbey, But Not 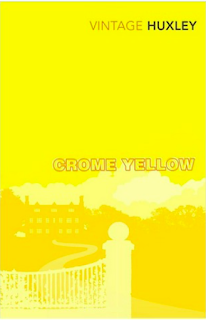 A couple of years ago I found this Vintage paperback while shopping at Shakespeare and Company. It was short, it was by Aldous Huxley, whom I knew only as the author of Brave New World, and it was about a country house in England in the 1920s. Sold! I finally picked it up last week because it had a color in the title, and because I had recently read Civil To Strangers by Barbara Pym, one of my favorite authors. In the introduction it mentioned how much she'd loved this book.

So, I thought this might be a little like reading a Barbara Pym book set in Downton Abbey, but most likely with fewer vicars and less mentions of cauliflower cheese. Published in 1921, it is the story of a Bright Young Thing named Denis Stone, who has been invited to spend some time over the summer at a country house called Crome, owned by the delightfully eccentric Wimbush family. Denis is smitten with the owner's daughter Anne, and spends his time struggling to woo her and write more poetry. The house is filled with various other guests, including historians, artists, and philosophers. The novella has a meandering pace in which not much happens except for witty asides, snark, and long tangents which includes sermons, and the back story of the family who owned the Crome estate. Here is one of my favorite examples:

As reading becomes more and more habitual and widespread, an ever-increasing number of people will discover that books will give them all the pleasures of social life and none of its intolerable tedium. At present people in search of pleasure naturally tend to congregate in large herds and to make a noise; in future, their natural tendency will be to seek solitude and quiet. The proper study of mankind is books.

(Aldous Huxley wrote this in 1921, clearly not having anticipated the invention of smart phones.)

Some of the book is eerily predictive and insightful -- a pastor predicts the coming of another Great War. Another segment is a spot-on commentary that would not be out of place in the current Time's Up Movement; in it, the host's daughter, Anna, defends herself to an amorous visiting artist:

You feel one of your loose desires for some woman, and because you desire her strongly, you immediately accuse her of luring you on, of deliberately provoking and inviting the desire. You have the mentality of savages. You might just as well say that a plate of strawberries and cream deliberately lures you on to feel greedy. In ninety-nine cases out of a hundred women are as passive and innocent as the strawberries and cream.

I think I liked this book more in theory than in its execution. This is normally exactly the sort of book that I should love yet somehow, I did not. I didn't have any patience with Denis and his pathetic attempts at romancing Anne when she was clearly not interested. Some of the side characters were amusing, particularly the uncle who has devoted himself to the history of Crome, but I did get somewhat bored with the philosophizing which often went on for pages and pages. For such a short novel (only 170 pages), it took me a surprisingly long time to finish it. Also I was annoyed to realize that I could have easily downloaded it for free instead of paying 12 euros for it. I also wished I could have just read Barbara Pym for this challenge instead -- I still have A Few Green Leaves on my owned and unread shelves (published in 1980, so it didn't work for this challenge). Well, I have crossed off my list if nothing else.

I'm counting this as my Classic with a Color in the Title for the Back to the Classics Challenge.
Posted by Karen K. at 1:21 AM