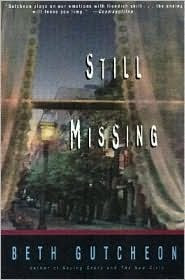 WHAT in the WORLD made me read this book?

A disclaimer:  this is not an awful book.  I have nothing against the author, Ms. Gutcheon, and I'm actually interested in reading some of her other books, like Leeway Cottage.  When it arrived from the library, my gut told me this was going to be a difficult book.  I almost returned it unread, but thought I'd try a few pages yesterday. Well, I got sucked in and had to finish the whole thing, basically in one sitting.  So yes, it is well-written and suspenseful, but very disturbing.

What the heck was I thinking?  This is a book about a woman whose not-quite-seven-year-old son is snatched on his way to school.   If you are the least bit sensitive about this sort of thing, DO NOT READ IT, unless you want to be handcuffed to your children until they are 30.

Okay, the synopsis part:  one spring afternoon, Susan, a professor living in Boston, realizes that her "very responsible" son Alex, who is nearly seven, is late coming home from school.  A quick call to a friend reveals that he didn't show up that day.  Panic ensues.  Susan is separated from her husband, the unfaithful Graham, and the rest of the book chronicles the horror of a missing child.  It's not only about the initial stages of the tragedy, the media attention, the phone calls, crackpots, etc., but about the long-term effects.  After a while, the media and the community becomes tired, almost embarrassed, about her plight, and eventually, she's treated as kind of an outcast and a crackpot for still wanting to believe he's alive.  It was heart wrenching.

Perhaps I am overreacting, but I found this book really upsetting.  I actually got it from the library because it is included in the list of books the wonderful company Persephone publishes in the U.K.  This is so not like their other books, such as Miss Pettigrew Lives for a Day, Miss Buncle's Book, etc., which have been charming domestic fiction written in the 1930s.  I've also recently enjoyed Kitchen Essays (1922) and Good Evening, Mrs. Craven: The Wartime Stories of Mollie Panter-Downes (originally published in The New Yorker during WWII).  Not. Like. Those. At. All!!!!

In its defense, the book is very well written, and (forgive me for slipping into cliche) a real page-turner.  I read the book all in one sitting -- because I had to find out what happened.  I used to read all kinds of thrillers, but I just don't have the stomach for them any more.   I can't even read Jodi Picoult, since her books are always about some kind of child tragedy.

Another thing that sort of bothered me was how homophobic the characters were.  This book was published in 1980, so I suppose that was typical of attitudes at that time; also, it's mostly unsympathetic characters who are spouting the slurs, but it still bothered me.