A Big Box of Penguin Classics!

My only New Year's Resolution was to curtail the amount of books I was adding to my to-read shelves by not purchasing any more books.  But gifts don't count, right?  Well, what about . . . prizes?  Because a couple of weeks ago I received an unexpected email from Penguin Books!  To my surprise and delight, this is what it said:

"Congratulations! Your predictions for the final list of 10 Essential Penguin Classics were closer than anyone else's (okay, full disclosure, you and another person tied, so we're awarding two grand prizes). Because of your Nostradamus-like powers of prediction, you've won a set of Penguin Classics Deluxe Editions."

I was gobsmacked!  Okay, I've won prizes before, but I don't think I've ever won anything that wasn't random or pure luck, like a giveaway from another book blogger, or a door prize.  Or bingo -- certainly nothing that involved actual skill or knowledge.  I've never even been able to guess how many jelly beans are in a jar (not that I'd even want them -- seriously, if isn't chocolate, why bother?).  But I digress.

Anyway -- today I received a box with TWENTY FOUR Graphics Deluxe Classics from Penguin books!  A twenty-three pound box!!  Here's a photo of what was inside, properly alphabetized by author: 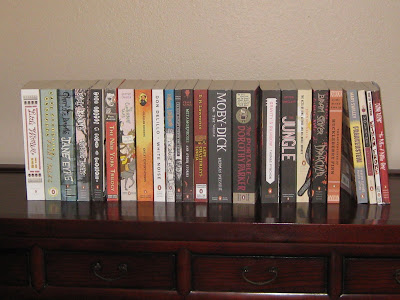 If you can't read the titles very well, here's a list of what was in the box:

Update: Titles with asterisks are those I have read.

I've read quite a few classics but only half of these, so I've just added another 12 books to my owned-and-unread challenge.  I do own a few of these already, my other editions aren't nearly as nice!  I had originally thought I'd share some of these with friends, here in town and in the blogosphere, but these are so beautiful I don't know if I can part with any of them. They now have their own dedicated bookshelf.
I'll start reading them soon and I'll be sure and post updates with my reviews.  Any suggestions where I should start?

And before I forget, thanks again to the generous folks at Penguin Classics, and congratulations to Jane at Reading, Writing, Working, Playing, the other winner of the sweepstakes!  Woo hoo!
Posted by Karen K. at 8:39 PM