The Sisters: The Saga of the Mitford Family by Mary S. Lovell 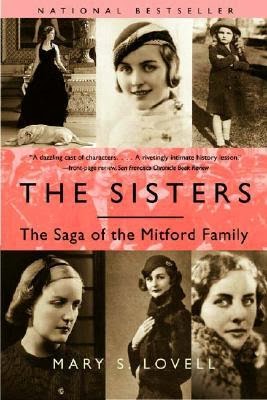 Sometimes when I read books off my TBR Pile Challenge list, it's kind of a slog, and I wonder why I bothered keeping this book around.  However, more often than not, I've been so pleasantly surprised by a book I'm annoyed at myself for waiting so long to read it.  The Sisters: The Saga of the Mitford Family is the second type of book -- a sheer delight and one that I couldn't stop reading.

I'd never heard of the Mitfords until I watched the BBC adaptation of Love in a Cold Climate around 2006.  I was so enchanted by the story that I quickly bought the book (a combined volume with The Pursuit of Love.)  I loved them both so I was delighted to find The Sisters, which I promptly put on my to-read shelf and then ignored, though I moved it from house to house.  I'm really glad I finally read it -- it's both a chatty tell-all and a fascinating biography of a the intertwining lives of six sisters from an eccentric aristocratic English family.

This is one of those stories that is truly stranger than fiction.  The eldest sister, Nancy, became a bestselling author; the third sister Diana was a reowned Society beauty who married an heir to the Guinness fortune and then left him for Oswald Mosley, a right-wing politician who became an infamous Fascist (both were imprisoned without trial for three years during WWII); another sister, Unity, was one of Hitler's groupies and was rumoured to have been his lover.  The next-to-last sister, Jessica (nicknamed "Decca") eloped with a distant cousin Edmond Romilly, a nephew by marriage to Winston Churchill.  Romilly had fought against fascism in Spain and they were both Marxists.  The youngest sister, Deborah, became Duchess of Devonshire.  So, you can just imagine that this book is just packed with interesting characters and history, mostly set during my favorite period, the inter-war years in England.  I will note that there's quite a focus on Unity's friendship with Hitler, which is really quite creepy.  There's also a lot of discussion as to whether or not some of the sisters were anti-Semitic. I know that this wasn't uncommon among the upper-class British at the time, but it sometimes makes for some uncomfortable reading.

All of the sisters (with the possible exception of Pamela, the second sister) were real characters, and they were all smart and witty -- sadly, they had very little formal education (some of the sisters never forgave their parents for denying them higher education).  Most of them had writing talent, and besides Nancy, Decca and Deborah also published books -- Deborah published a memoir called Wait For Me! back in 2010.

I really enjoyed this book -- it's just chatty and gossipy enough to be fun, and includes enough history and politics to be informative, without getting bogged down in too much politics and jargon.  And I was surprised that I never had any trouble distinguishing between all six of them -- they had such distinct personalities.  I only had a few quibbles with the book -- there's not much about the second sister, Pamela, for one thing; also, I did have trouble keeping track of all the many houses the families lived in -- a map would have been incredibly useful, to go along with the family tree and extensive endnotes.

Overall, though, it's a great biography and I'm very interest to read more of Lovell's books.  She also wrote a biography of Beryl Markham called Straight on Till Morning; The Churchills: In Love and War, plus several others.   The book has really piqued my interest about the Mitfords.  My TBR shelves still include  Hons and Rebels, Decca's memoir; Nancy's book Wigs on the Green, a satire about the fascist sister Unity; and a 700-page volume of Decca's letters.  Hopefully I'll get to some of them before the end of the year.  And now I'm halfway through my TBR Pile Challenge -- I've finished six books in six months, so I'm right on track.
Posted by Karen K. at 6:30 PM