The Moon is Down by John Steinbeck 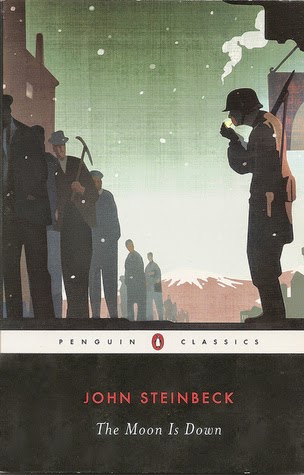 I hadn't read anything by John Steinbeck in ages -- looking back, it's been nearly two years since I finished East of Eden.  I mostly love Steinbeck, but I think his work is a little uneven -- I tend to love the longer works but the shorter works are hit or miss.  I loved Travels with Charley and Cannery Row, but I never felt the love for Of Mice and Men.  The Pearl was just so tragic, and I couldn't even get through The Red Pony.

Recently I'd just finished Kim, which took me a really long time for such a short book.  I wanted a short classic to cross off my list, and something totally opposite from Kipling -- Steinbeck was just the thing, and I could count it as my Classic about War for the Back to the Classics Challenge.  The Moon is Down is extremely short, just over 100 pages.  I probably could have read the whole thing in one sitting. 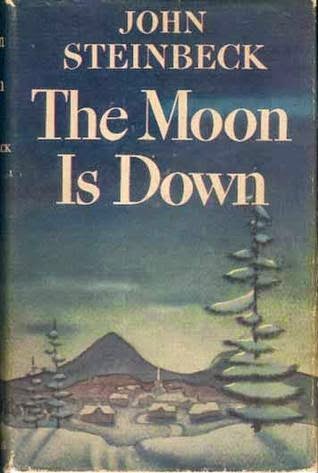 Published in 1942, this novella is the story of an anonymous town that's suddenly overrun by an invading army.  The names are vaguely American but the setting seems Scandinavian -- it's an coastal town with a coal mine, and it's terribly cold and snowy.  The invaders, who are obviously Nazis but are never specified as such,

The cast of characters is small -- a few officers from the invading army; the Mayor; the town's doctor; and a few townspeople.  Basically, this is a fable about how an invading army assumed it would be easy to take over a town by surprise, with little opposition, and how they underestimated the will of the people.  Steinbeck wrote this novella during WWII, as a piece of propaganda to encourage resistance against the Nazis.  It was quickly translated into a multitude of languages, and almost as quickly banned by the Nazis. 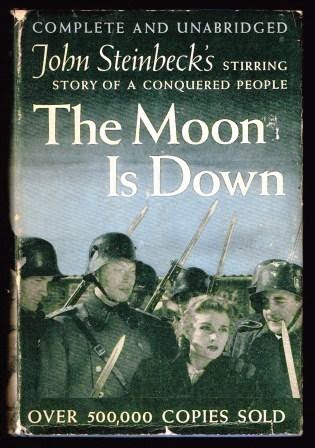 I found this story particularly interesting because it was written and published while the war was still going on -- I think the perspective must be quite different than writing a book in hindsight, when the author knows the outcome of the war.

I liked the story, though it's short and there isn't a huge amount of characters or character development.  Parts of the book are a little preachy.  I found the introduction (which I always read after I've finished a book) especially interesting, as it gave a lot of historical perspective about how the book was received and reviewed.   Apparently, there was a lot of backlash against Steinbeck because he made the invading characters somewhat sympathetic -- at least, not completely evil.  They were believable as people who could have had some good characteristics, although they were on the wrong side.

The introduction also gave a lot of insight as to how this book was received in other countries -- although it was blasted by Americans, it was very well received by Norway and many other countries, in Europe and farther abroad as well.

Overall, a good quick read, though not my favorite Steinbeck.  I still want to read Sweet Thursday, the sequel to Cannery Row, which I loved, so maybe I'll choose that for my American Classic for the Back to the Classics Challenge.

Bloggers, what's your favorite book by Steinbeck?  And how is everyone coming along with the Back to the Classics Challenge?  This takes me up to 7/11 -- I'm more than halfway done!
Posted by Karen K. at 12:00 AM