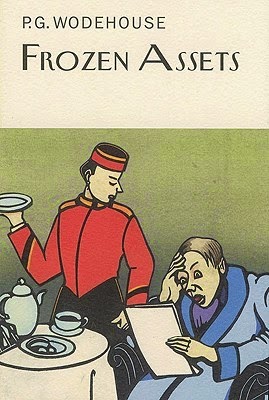 My first book for the Back to the Classics Challenge 2015!!  I wanted to start out the year with a fun, quick read, and I have several unread books by P. G. Wodehouse on the TBR shelves -- just the thing.

Many people are familiar with the works of Wodehouse because of his most famous characters, Jeeves and Wooster, and the brilliant BBC adaptation starring Stephen Fry as Jeeves and Hugh Laurie as the hapless Bertie Wooster.  No Jeeves and Wooster in this book, but it's classic Wodehouse -- basically, a screwball comedy.  It starts out with a very funny scene in which Jerry Shoesmith, a young English journalist, is trying to report a lost wallet at a Paris police station.  The French policeman, who loves bureacracy, decides to make things difficult for poor Jerry, whose keys were also in the wallet, so he can't get back to his uncle's apartment for the night.  However, all is not lost, because Jerry runs into the beautiful Kay Christopher, an American whom he met on a ship a couple of years ago.  She's at the police station reporting the absence of her brother Edmund, also known as Biff.

Lo and behold, Biff has absconded back to London to avoid the French police.  It seems Biff has a tendency to get drunk and assault policemen.  However, back in London, he discovers that he's become a millionaire overnight, since his eccentric godfather has passed away and left him a fortune -- with strings attached.  It seems Biff has to stay out of trouble until his 30th birthday, which luckily is only a week away.  Unluckily, the fortune would then pass to his godfather's brother, Lord Tilbury, who just happens to be Jerry's former employer.  Tilbury will stop at nothing to get Biff in trouble and get his hands on the money.  Jerry wants to help Biff because he's in love with Kay, who unfortunately is already engaged to a stuffy British diplomat.

The book is short, but delightful, full of witty repartee and downright silliness.  There are love triangles and quadrangles, amazing coincidences, and a great recurring bit about missing trousers.  Being Wodehouse, it all comes right in the end.

Wodehouse wrote more than 70 books, over a period of about as many years.  Frozen Assets is fairly late, published in 1964 (so it just qualifies for the Back to the Classics Challenge), but the humor is timeless.  This was a perfect choice for my Humorous Classic category for the Back to the Classics Challenge.  Originally, I was planning on reading The Pickwick Papers, but it's nearly 800 pages so I'm saving that for my Very Long Classic.

Anyone else a Wodehouse fan?  Which are your favorites?  And has anyone else started on the Back to the Classics Challenge yet?
Posted by Karen K. at 11:01 PM