The Girls From Winnetka by Marcia Chellis 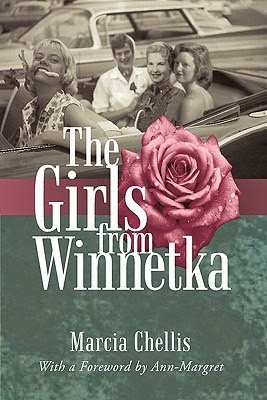 Well, that was disappointing.

I was really looking forward to starting my TBR Pile Challenge reading list for 2015.  After finishing one giant doorstopper of a book (which I loved), and having about another 20 audio discs to go on a second, I naturally looked through the pile and chose the shortest book.  I have a really hard time leaping from one enormous book to another.  My choice was The Girls From Winnetka by Marcia Chellis. I received this as a prize drawing gift from another blogger back in 2010.   Unfortunately, I wasn't nearly as enamored of this book as she was.

This is the true story of five friends, women who graduate in the same high school class in Winnetka, Illinois, an upscale Chicago suburb, in the late 1950s:  Annie, Margo, Barbie, Laura, and Brooke.  (No last names are given in this story; we don't even know the actual year they graduated).  The book covers their changing lives throughout the decades and examines them in light of the social upheaval of the 1960s and 70s, and the changing role of women.  Each chapter is split up between the five women as they live through different decades, from the 1950s through the 20th century, beginning and ending with a reunion of these lifelong friends.

I was particularly intrigued by this book because I love nonfiction (my entire TBR Pile Challenge list is nonfiction this year!) and because I lived for about ten years in Chicago and the suburbs.  I've been to Winnetka many times and actually know people who graduated from this very high school, New Trier. I also attended the same university as one of the women in the book, and I really hoped that this book would really connect with me.

Unfortunately, it really didn't.  This book was published by a small independent publishing company, and it really showed.  I found the quality of the writing really lacking, with some serious errors in punctuation, and the style just felt amateurish.  (I should confess upfront that I am a person who becomes easily annoyed by the misuse of an apostrophe.) Maybe I'm especially nitpicky, but it really bugged me that the author (or editor) misused commas and italics repeatedly -- basic stuff that any middle school teacher would mark down.  I know my blog posts aren't always perfect, but I'm not asking anybody to pay to read my stuff.

The story was also quite disjointed, with huge gaps in the narrative.   I think these women really did have interesting lives, and I'm quite sure I would have gotten more out of this book if it were better written.  I just couldn't get past the poor quality of the writing and editing.  It really seemed like a first draft to me.  It was only 240 pages, so it was a fast read, but I'm sure I would have liked it much better if it were longer and the women's histories were expanded.

However, I won't be discouraged with the rest of my TBR Pile list; I've just started the next book on my list, and the first twelve pages of the prologue were infinitely better written than The Girls From Winnetka.  I've heard excellent things about nearly all of the other 11 books on the list, and the two alternates, so if nothing else I knocked the worst one off the list first.
Posted by Karen K. at 10:52 AM