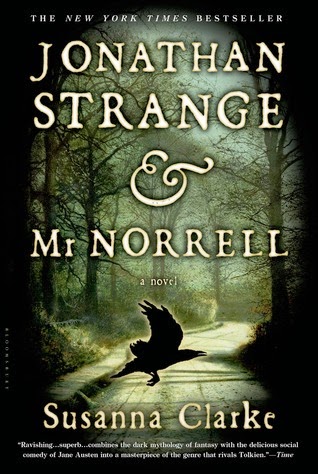 As usual, I am years behind everyone else and am only now reading the Next Big Literary Thing.  (I suppose now it's just a Literary Big Thing.) Ten years!  That's how long it took me to read Jonathan Strange and Mr. Norrell,  though I've only owned this book for about three years (which I got at the bargain price of $1 at the library's Friends sale), and is yet another Big Fat Book that has been taking up space on the TBR shelves.  This book is almost 800 pages, and I've already started the audio of The Pickwick Papers.  I really and truly had no business starting this doorstopper, but it looked dark and mysterious, and that's exactly what I was in the mood for on New Year's Day when I picked it up.

Quite frankly, it's just BRILLIANT. It's taken me almost two weeks to finish (due to interruptions), but honestly, I didn't want to rush through it. This is one of those books that I was glad to savor and read in bits in pieces. I didn't want to stay up all night to find out how it would end. I wanted it to last forever, because I knew I'd be sad when it was over.

For those who don't know the setup, Jonathan Strange and Mr. Norrell begins in 1806, in Yorkshire.  There is a society of magicians, who really don't know much about magic, but they've heard that there's a Mr. Norrell with an amazing library of magical books and who claims to be the last practicing magician in all of England.  A couple of them go to meet him, but either he's a snob or he doesn't like competition.  He makes them an offer: Mr. Norrell will do something amazing to prove he's a magician, but all the others must sign an agreement that they'll never try to do magic again.  All but one of them accept.

Well, he does do something amazing -- he goes to a cathedral and brings all the statues to life.  Everyone's abuzz with the possibility of actual magic back in England. Mr. Norrell moves to London and meets a lot of fashionable people, and then he performs another unbelievable feat of magic. Soon all of London is crazy for magic. Mr. Norrell offers his services to help with the war against Napoleon. He also takes on a single pupil, Jonathan Strange, a wealthy young man who's a bit of a dilettante, but he seems to have found his calling as a magician. The rest of the book consists of the the development of the relationship between Strange and Norrell, and the changes that magic brings to England.

This 800-page book is set up very much like a Victorian serial.  There are 69 short chapters, all about ten pages long, which was really nice for reading in bits and pieces. This isn't a book I wanted to rush through.  It took me more than two weeks to finish this book, and I was glad to stretch it out.   I can definitely imagine this published weekly, like the novels of Dickens and Trollope.  It has a very Dickensian feel about it, though it's set in the Regency period which was the time of Jane Austen.   I normally hate comparing books to other books, but I couldn't help thinking that if Jane Austen and Charles Dickens could have met and written their version of Harry Potter, it would have been very much like this. Susanna Clarke nails the Victorian writing style more than any other historical writer I've read.

It's also written as though it were an actual history of how magic came back to England, complete with footnotes to explain all the references they make, mostly about ancient magicians and stories of magical events in the past.  I also found it very funny in parts -- there are a lot of snarky little asides.

Some people have complained about the pacing of this book, but I thought it was just right.  I just loved the world of Strange and Norrell and I'm really sad now that I've finished the book.  It took Susannah Clarke about ten years to write it. I've heard that she's writing a sequel and I really hope that's true, and that it won't take too much longer for it to be finished.

In the meantime, apparently the BBC is adapting it into a TV miniseries!  That's actually one of the reasons I decided to tackle this book -- I really wanted to read it before I watched it on TV. It's going to air here in the States on BBC America, though there's no word yet when it will actually be shown.  I'm glad it's a miniseries and not a TV movie or feature film, because the format is just right. Eddie Marsan is playing Mr. Norrell and though he's young for the role, I'm sure he'll do a wonderful job.

There are some other production stills floating around the internet. I don't recognize any of the other actors but I'm really hoping it will live up to the novel.  Susanna Clarke also published a book of short stories called The Ladies of Grace Adieu, and I've already requested it from the library.