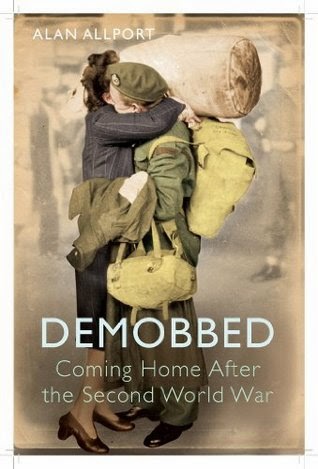 The other day, I was working at the circulation desk at the library, and a patron returned a book that I really want to read, River of Doubt by Candice Millard.  When I asked how he liked it, he seemed a little dismissive.  "Well, I have a Ph.D in history," he said, basically implying that the book wasn't particularly academic in nature.  Now, I have been reading more and more nonfiction the past few years, and I even started a book group at my branch that reads only nonfiction.  I'm finding nonfiction to be better written and more accessible than ever before.  It never occurred to me that this could be considered a bad thing.

However, my most recent nonfiction book was all of the above -- well-written, accessible, AND academic.  Demobbed: Coming Home After the Second World War by Alan Allport is a fascinating read about the lives of British soldiers (and to a lesser extent, civilians) during the period immediately after WWII, when millions of men returned home during peacetime after the war.

I must admit I knew next to nothing about this when I started -- everything I know about postwar Britain is from TV series like Call the Midwife.  I did realize that food and gas rationing went on for years, but I am sure to myself, and many others, my first thoughts are about the soldiers returning home to ticker tape parades, kissing nurses in the streets, like the iconic Life magazine photo.

The book isn't terribly long, about 225 pages of narrative of text, but it's packed with information.  Here are a few facts that I learned:
This book was extremely interesting and well-organized. In the introduction, Allport explains that this book was originally an academic thesis (it's published by the Yale University Press). Compared to most of the nonfiction I've been reading the last few years, Demobbed is definitely written in a more formal style than some of the nonfiction that I find on the library shelves, but it's still very accessible. I really enjoyed this book, especially compared to the disappointment of the previous book I read from my TBR Pile Challenge 2015 list. I highly recommend it for anyone who's interested in the postwar period.

I still own two more nonfiction works about post-war Britain on the TBR shelves: Millions Like Us by Virginia Nicholson and Our Hidden Lives by Simon Garfield. Bloggers, have any of you read either of these? And what other books about WWII and postwar Britain do you recommend?
Posted by Karen K. at 12:45 PM