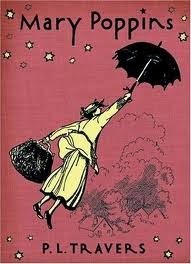 "She knew very well that Mary Poppins never wasted time in being nice."

Growing up, I missed an awful lot of the children's classics -- I read and loved the Narnia series, the Little House books, and the Boxcar children, but I never even read The Wizard of Oz series until I was in middle school (and I skipped the first book, assuming it was just like the movie.  I was quite wrong).  I am now officially adding Mary Poppins to the list of books I regret never reading while I was an actual child.

If you're not familiar with the plot, Mary Poppins is a mysterious, magical nanny that shows up and takes charge of the four Banks children after their Katie Nanna leaves on short notice.  She's not what you'd call warm and cuddly -- she's actually rather short and brusque with the children -- but when Mary is around, wonderful things happen.  The two elder children, Jane and Michael, have fantastic adventures with Mary, including a visit to the zoo at night when the animals are running the place; a tea party held whilst floating up near the ceiling; and a magical trip around the world.

Mary Poppins was never among my favorite Disney movies when I was a kid, and when my own children were born, I didn't enjoy it much more.  It was only after I saw Saving Mr. Banks that I had any read desire to read the book to see how it compares to the movie.  Well, it's far superior -- in fact, there's barely any resemblance to the movie at all, except the famous opening when she comes in with her carpet bag and slides up the bannister; and her evening out with Bert.  It's possible that other elements in the movie are taken from later books in the series, which I haven't read yet, but if you're a fan of the movie, you might be disappointed.  Mr. and Mrs. Banks are barely mentioned, and there are no chimney sweeps in sight.

I also did not realize that this book was revised by Travers back in 1981.  I'd been listening to the audio, and when I have a hard copy, I like to see my progress by comparing it to the print book.  So, I looked in my copy to check my place, and was VERY surprised to see that my current chapter, "Bad Tuesday" was QUITE different -- as in quite racist!

That particular chapter starts out with Michael getting out of the wrong side of bed.  Everything goes wrong all day and he's being very naughty.  They're out on a walk and spot a compass on the ground, and Mary Poppins uses it so they can travel around the world.  In the audio version, they go in all four points of the compass, and visit a polar bear, a macaw, and panda, and a dolphin, and it's quite delightful.  Apparently in the original version it's people, and the visit to Africa is particularly offensive.  But I'm glad to say that the revised version is much better.

Though I do own a print copy of the book, I mostly listened an audio version, which I just loved.  The reader, Sophie Thompson is one of the most delightful audiobook narrators I've ever encountered.  (Yes, that's the Sophie Thompson who is the sister of Emma Thompson, who played Miss Bates in Emma and Mary Elliot in Persuasion).  She's just perfect for Mary Poppins -- Mary is very no-nonsense, the children are full of wonder, and her accents are spot-on.  I'm planning to read the entire Mary Poppins series, and when I do, I will imagine Sophie Thompson narrating all the rest of the books in my head.

I'm counting this book as my Children's Classic for the Back to the Classics Challenge.
Posted by Karen K. at 5:49 PM