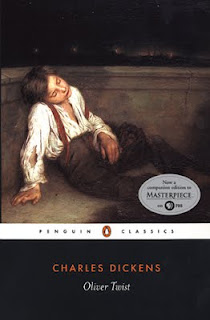 After finishing David Copperfield last year, I was a little burned out on Dickens.  Okay, let's be honest -- it was a Dickens OD!  In twelve months, I had completed five major works, four of which were more than 800 pages.  That's. A lot. Of. Dickens.  Anyway, after a break, I returned to my online Dickens group, which recently decided to start reading the books in order of publication. Though I'd read Oliver Twist just a couple of years ago, I enjoyed it just as much the second time around.

For those of you who are not familiar with the basic plot, here it is in a nutshell: Poor Oliver Twist is born in the workhouse to a mysterious woman who dies in childbirth. After nine years in a wretched orphanage, he's sent to the back to the workhouse to start earning a living, and one fateful day, he has the nerve to request a second helping of food: "Please sir, I want some more." After even more mistreatment, Oliver runs away from an apprenticeship and makes his way to London. En route he meets up with a boy nicknamed the Artful Dodger. Oliver, grateful for food and guidance, unwittingly follows the Dodger and joins a band of thieves run by the malevolent Fagin, who is in league with the evil Bill Sikes. But will Oliver's inherent goodness prevent him from falling under their evil influence? Will Oliver fall into a downward spiral and a life of crime, like so many other poor children?

More than anything, I think Dickens' strength is his ability to create fantastic, cliff-hanging plots and memorable characters.  It was twenty years between my first and second readings of Great Expectations,  yet I vividly remembered Pip, Joe, and the creepy Miss Havisham.  Every Dickens work I have read includes several memorable characters -- it would take too long to list them all here.  But I think everyone has heard of poor little Oliver begging for more gruel; the Artful Dodger, and of course the sinister Fagin.  Honestly, Dickens writes the best villians in Victorian literature (with apologies to all you Wilkie Collins fans); maybe even the best villains ever.  Bill Sikes? Madame LeFarge? Mr. Tulkinghorn?  Completely evil, completely memorable.  To read Dickens is to remember it forever, in my humble opinion. So those are Dickens' strong points.  Other points: It's true,  Dickens wrote his works as serials, so they tend to be long (OT is one of the shorter works, 430 pages of actual text in my edition; the rest is explanatory notes and introduction). Yes, he does include improbable coincidences, and some of his sentences tend to be long and flowery. But he creates such amazing plots, such indelible characters, and you can't beat the satire. Here's an description of the food in the workhouse:

[The workhouse board] contracted with  the water-works to lay on an unlimited supply of water; and with a corn-factor to supply periodically small quantities of oatmeal; and issued three meals of thin gruel a day, with an onion twice a week, and half a roll on Sundays. . . . For the first six months after Oliver Twist was removed, the system was in full operation. It was rather expensive at first, in consequence of the increase in the undertaker's bill, and the necessity of taking in the clothes of all the paupers, which fluttered loosely on their wasted, shrunken forms, afer a week or two's gruel.  But the number of workhouse inmates got thin as well as the paupers; and the board were in ecstasies.

I must also admit that Oliver, the character, is sometimes really annoying -- he is so perfect, so sweet, that I sometimes get a little nauseated.  I do find that Dickens' good characters tend to be on the bland side, not nearly as well-developed as the villains.  And I'm sure some readers may also put off by the blatant anti-Semitism in the novel.  Fagin, a grotesque, devilish villain, is referred to over and over again as "the Jew," which is definitely off-putting.  I'm not sure if Dickens was simply of product of his times, or if he was truly anti-Semitic; but like many excellent works of literature, I don't think Oliver Twist should be ignored entirely because of only one of its elements.   I have heard that Dickens later regretted his terrible portrayal, and tried to atone for it somewhat by creating a much more admirable Jewish character in one of his later novels, Our Mutual Friend.

Currently, I've read about half of Dickens' major works, and I hope to complete two or three more by the end of the year.  I belong to a great online Dickens discussion group, The Inimitable Boz, and if I assume correctly the next two books are The Old Curiosity Shop and Barnaby Rudge.  I'm pretty excited about these as they are among the less popular works and I know so little about them.

So share with me, bloggers!  Do you have a favorite Dickens? Is Bill Sikes the scariest villain ever?  Is Oliver a sweet boy or just really annoying?  I'd love to hear your opinons.

This counts as my third book for Our Mutual Read Challenge -- only nine left to go!
Posted by Karen K. at 5:48 PM