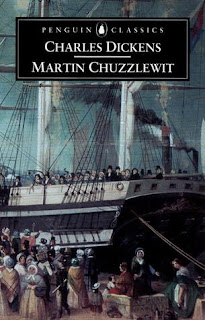 Well, I have finally finished this nearly 800-page doorstopper, and I have to say I am darn proud of myself -- especially since I finished the last 400 pages in just about a week.  Dickens sometimes takes awhile to get started, but once the story got rolling, I needed to finish it.  I have now finished ten of the sixteen major works by Charles Dickens.  Six more to go!

After struggling for weeks with the beginning of this book, it finally started to pick up and got interesting.  However, the title of this book is very misleading.  There are actually two Martin Chuzzlewits, and neither of them is really the main character.  Basically, it's a book about greed, and selfishness, and loyalty, be it to friends or family.  It's also about how terrible situations bring out the best and the worst in people.  There are funny characters, and grotesques, and the typical Victorian tropes of misunderstandings and unbelievable coincidences.  And it all ends up pretty well, though some people are much happier than others.

I'm not sure why this book is so obscure among the Dickens canon -- it's kind of uneven but it turned out to be a very enjoyable read.  Having read several Dickens now, I can see that it contains elements of both the earlier and the later novels -- it's picaresque like Nicholas Nickelby, yet it also has the beginnings of the multiple storylines of Little Dorrit and Bleak House.  I would categorize it as a transitional novel.

Other than the very slow start to this book (it took nearly 200 pages for something interesting to happen) my biggest quibble with this book is the title.  It's named after Martin Chuzzlewit, but honestly, Martin's part isn't even that big, especially when you compare it to the other Dickens works with eponymous titles.  Oliver Twist and David Copperfield?  Makes perfect sense -- these are the main characters and all the action revolves around them.  Little Dorrit?  Well, she's a little more peripheral to the story, but I guess I can agree with that one.  I haven't read Barnaby Rudge or The Mystery of Edwin Drood yet, so I can't comment on those.  But Martin Chuzzlewit is a terrible name for a book.   I suppose one could make the case that it's really about Martin the elder, whose appearance sets all the book's action in motion, since he arrives and gets all the relatives jockeying for position to see if they're going to get a get a piece of his estate in the event of his death.  Really, he's hardly in the book at all.

And Martin the younger leaves for America, but he doesn't really get that much time in the book either.  There's a lot more time spent on his faithful friend Tom Pinch, his nasty cousin Jonas Chuzzlewit, and the Pecksniff family, and what happens to them back in England during Martin's absence.  It's a good book and the plot and characters turned out to be interesting, but I personally think he could have come up with a better title.

When I begin to think about it, Dickens' other titles aren't all that interesting either.  Great Expectations?  A Tale of Two Cities?  Bleak House is my favorite, and Dombey and Son has great irony, but overall I think Trollope did a better job naming his books.  You can't beat Can You Forgive Her? and He Knew He Was Right, or my personal favorite, Is He Popenjoy?  (What the heck does that mean?)  I still haven't read any of these titles, but they intrigue me. Yet they sit waiting patiently on the to-read shelf while I'm still trying to finish the major works of Charles Dickens.

This book also counts towards three of my challenges:  The Victorian Challenge; The Classics Challenge; and the Chunkster Challenge.
Posted by Karen K. at 11:31 AM